This paper proposes a commercial drone mapping solution for the Phantom PPK to significantly reduced control points, explains the workflow, testing methods and how the results support this level of drone mapping accuracy. 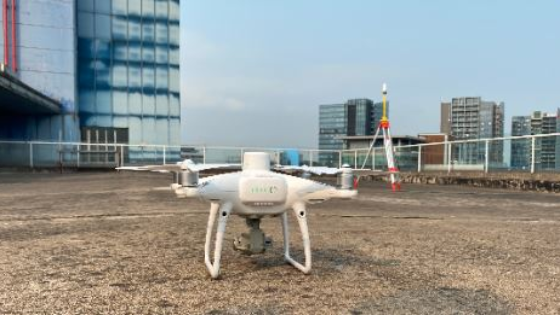 Previously, people had to invest more than 30,000 dollars to purchase professional mapping drones and place a large number of control points on the ground to get accurate, survey-grade maps. This situation continued until DJI released the Phantom 4 series of commercial drones with integrated GNSS antenna and high-definition gimbal cameras. This paper proposes a commercial drone mapping solution using a Phantom PPK to significantly reduced control points and explains the workflow, testing methods and how the results support this level of drone mapping accuracy.

The Phantom 4 RTK(P4R) is a technologically mature, cost-effective consumer-grade drone that is popular on the market. It is flexible, simple to operate, and supports RTK cm-level navigation, as well as camera microsecond synchronization and free of user calibration, is particularly suitable to use in densely built-up urban and areas with complex topography.

Despite there is an integrated GNSS RTK antenna onboard, which enables the autopilot system to directly tag the positioning coordinates and accuracy factors into the imagery attributes (EXIF) after accessing the NTRIP network differential sources, PPK(Post-processed kinematic, no real-time connection between the base station and drone is required.) is a more reliable method to avoid correction interruptions that frequently occur in urban and areas without 4G signal coverage. Also, the corrected GNSS error is proportional to the distance from the base station to the drone(baseline), so a PPK base set a few hundred meters from the drone provides significantly higher quality position fixes as compared to a network base station (NTRIP CORS) potentially a few kilometres away. 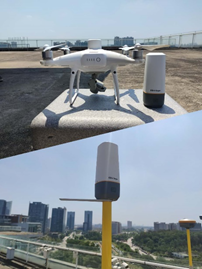 Hi-Target inno1 Portable RTK is used to provide stable and reliable base raw static observation data for the PPK processing. It also could work as an RTK rover to measure the checkpoints on site.

PPK Go is a turnkey software that enables Phantom 4 drones to achieve the most accurate and reliable camera positioning data in any coordinate system without measure targets or GCPs. With 2cm accuracies on X, Y, Z dimensions, the output text file with position information or geotagged images can then be used directly in major photogrammetric mapping or 3D modelling software.

Our team selected an industrial park in a typical urban environment as the site for the actual test to validate the accuracy of the final results. The specific testing process is divided into the following three parts, which are detailed below.

The control points are used to improve the accuracy of aerial models. The density and distribution affect the adjustment of the aerial triangulation and hence the accuracy of the final results. For this test, as shown in Figure 4, eight points were placed evenly inside and outside the area. P1, P3, P7 were planned as control points, and the rest were checkpoints.

The coordinates of points P1 to P8 were acquired using the inno1 Portable RTK when the error of the fixed solution converged to the millimetre-level. Each point was observed independently thirty times and took the average value as the measurement results. The detailed distribution of the points and their measured coordinates are shown in Figure 3-1 and Table 1, respectively. 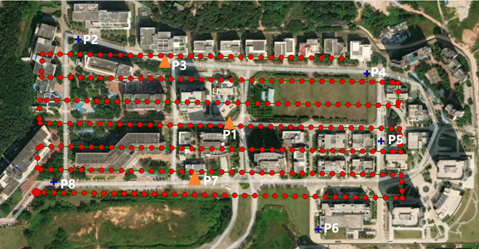 Note that the checkpoints P2, P4, and P6 are outside of the flight zone. We wanted to test nonoptimal surveying situations. 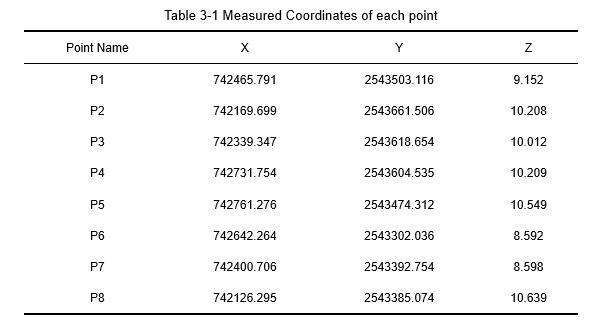 Firstly, set up the base station on the known point, measure the instrument height and then start the static recording at 1Hz interval before the flight.

The mapping area was selected in the App installed on the remote control and the mission planned according to the parameters in Table 2. We simultaneously activated the RTK geotagging function (NTRIP) to compare the difference in the accuracy of RTK and PPK modes.

The flight mission took about 18 minutes and a total of 267 images were collected, all of which were geotagged RTK fixed coordinates.

Run the PPK Go post-processing software, created new projects and imported the base station and flight project data separately. The software automatically checked the dataset integrity and matched the imagery, raw observations, and the timestamp file in the folder.

After configuring the ellipsoid & projection and entering the known coordinates of the base station, clicked the process button to start the processing. The waypoint with the fixed solution was marked in green on the graph of the interface. 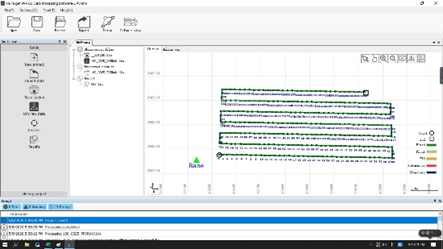 After PPK processing, all the waypoints got fixed.

Finally, clicked "Export" to geotag the processed high precision coordinates into the imagery and saved it as a new dataset.

At present, there are many kinds of drone image data processing software available, such as Pix4Dmapper, MetaShape, Inpho, Context Capture, Dronedeploy, etc. The software functions are similar. Due to differences in their algorithms, each has its advantages. This validation project used the Pix4Dmapper for image processing, which is widely used and fully automated drone data and aerial image processing software. It consists of three steps:

Create new projects, import image files and edits, coordinate and provides a projection system. Each image’s geolocation information is automatically read and displayed from the EXIF property field. After you have confirmed and performed a quick initialization, the software will automatically complete the following steps.

This step will build on the Automatic Tie Points with Point Densification and 3D Textured Mesh.

After the processing has been completed, we clicked the mosaic editor to fine-tune the image and complete the generation of the digital surface model (DSM) and digital orthophoto map (DOM). 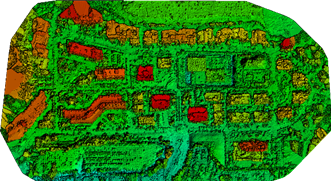 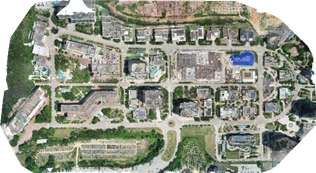 Once the data was processed, we queried the coordinates of each checkpoint on the map and then compared them to the corresponding RTK measured coordinates to calculated the variances dX, dY, dZ.

The horizontal accuracy of NTRIP RTK and PPK are both within 5cm without control point correction, which is the ideal accuracy for the topographic survey. In the elevation dimension, RTK accuracy needs to be corrected with a small number of control points to reach the same level as PPK. The elevation precision is more susceptible to the control points correction relative to that of horizontal. When NTRIP RTK that may be affected by the quality of communication and the working environment are taken into account, PPK provides more reliable and stable accuracy optimization and are less dependent on control points.

The accuracy of points P4 and P6 is worse relative to the rest ones, both in RTK and PPK mode. And when corrected by the control point, its accuracy is greatly improved. For points outside the route coverage zone, their accuracy is relatively poor under the condition of zero GCP, it is necessary to optimize by appropriately expanding the route area or placing a small number of control points.

The Phantom PPK solution consistently delivers accuracy down to 5cm or below (Depending on GSD) across the entire survey. Compared with the traditional drone mapping method, it greatly reduces the reliance on control points, reliefs the workload of fieldwork, improves both efficiency and safety, and provides a reliable, cost-effective commercial solution for drone mapping.

[1] Liu Jianguo. Research on the production method of Surveying and mapping products based on DJI drones [J]. Smart City, 2019(18).

Do you want to get in touch with Hi-Target after reading this article? 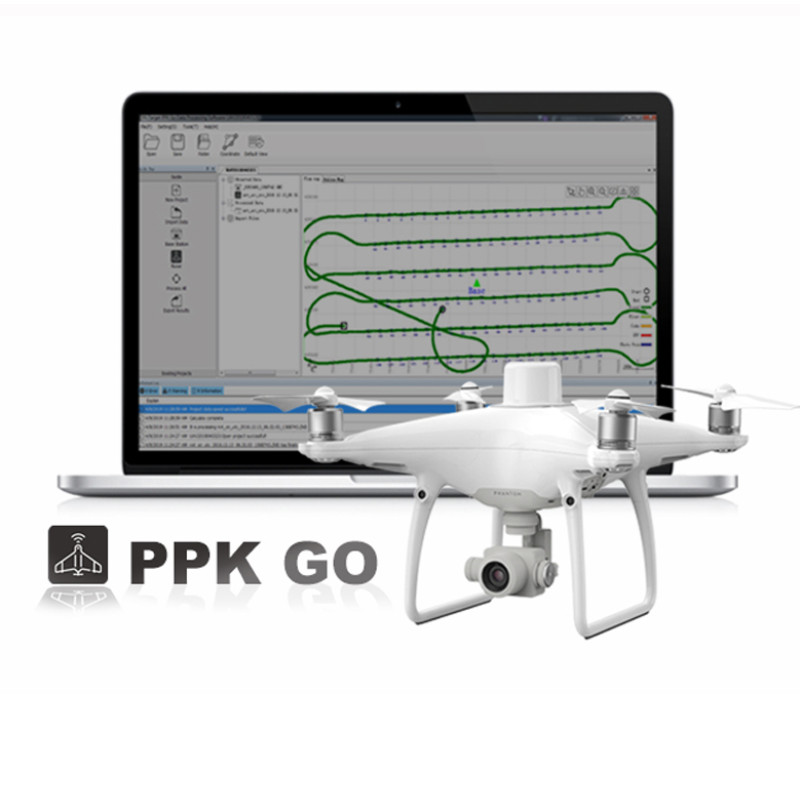