The advent of Ground Penetrating Radar (GPR) can be traced back to as early as 1910 when the first patent for this technology was filed. After years of development in radio technologies, digital signal processing (DSP) as well as breakthroughs in the software field, GPR has become a highly valuable tool for many varied applications. 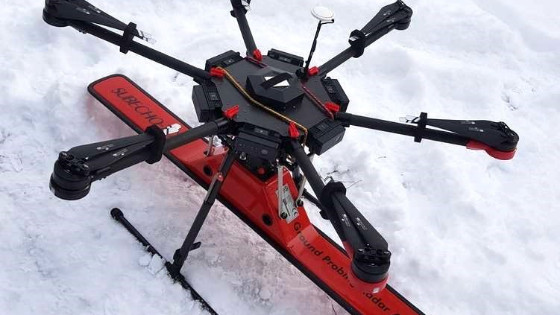 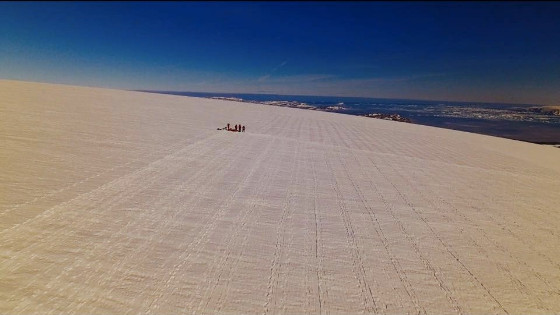 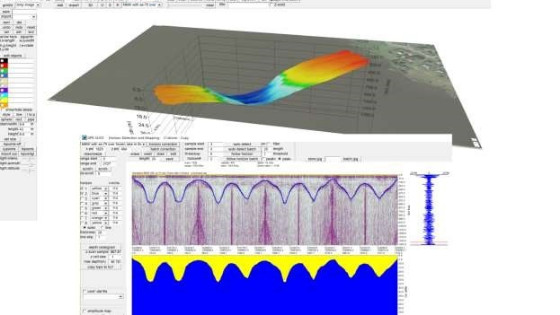 Currently, GPRs are widely used in geophysical surveys, underground infrastructure mapping, unexploded ordnance (UXO) and mine detection, searching of buried objects, archaeology, and many other fields of study.

The standard method for GPR surveys often includes towing the GPR antenna on a cart or a slide. The cart can either be pushed or towed by a human, a vehicle or other means (see Fig. 1 and Fig. 2). 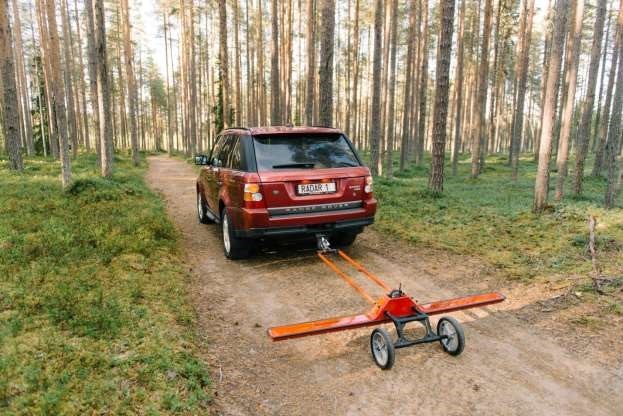 Figure 1. Cart-mounted GPR system being towed by a vehicle. 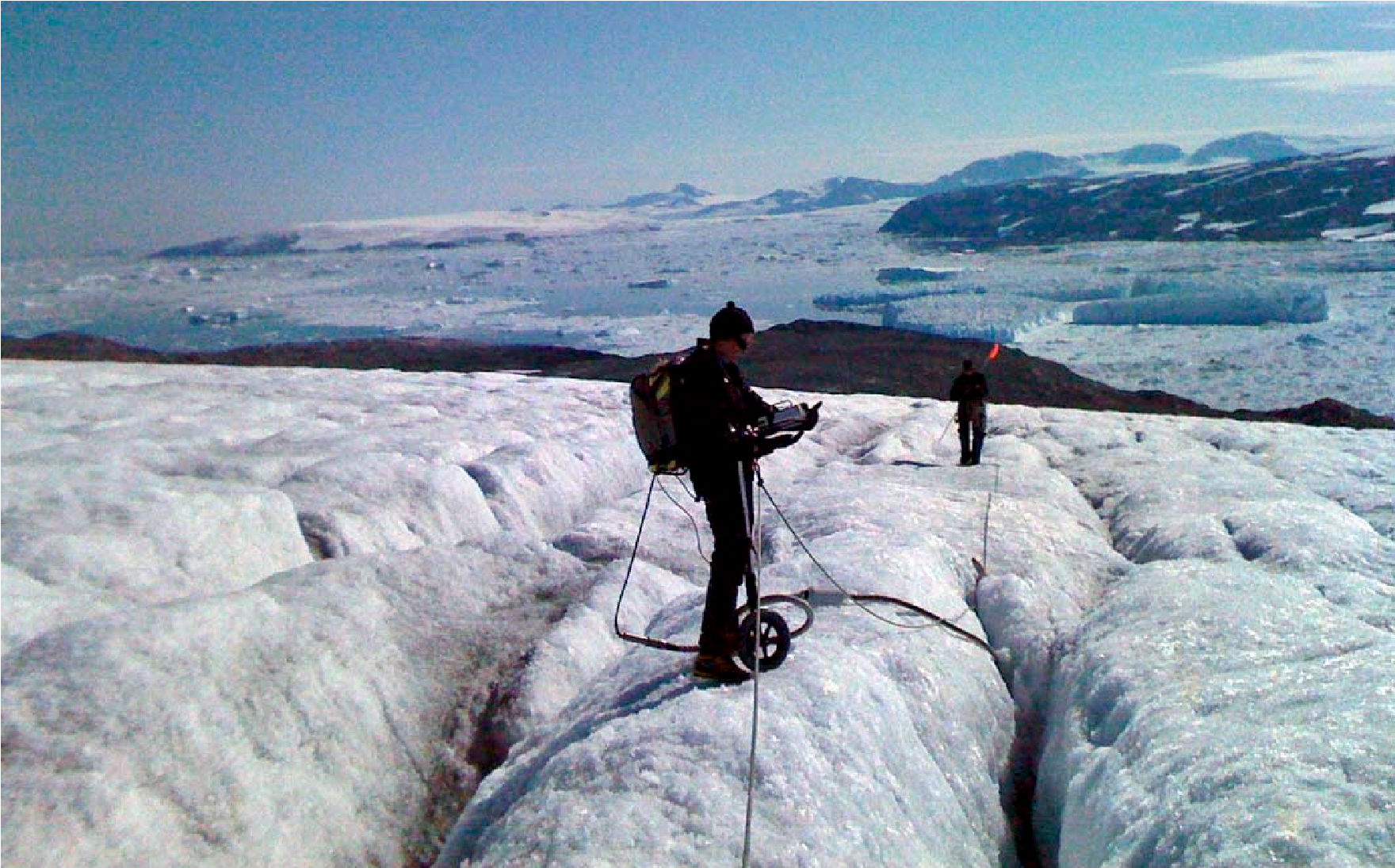 Figure 2. Before the availability of GPR mounted on a drone, searching for a missing WW2 aircraft in Greenland entailed dragging a manual dolly equipped with a GPR radar system over dangerous crevasses and perilous terrain.

In some cases, GPR systems can be mounted on manned aircraft - helicopter or airplane, but this method is only applicable if a good resolution isn’t required since the aircraft has to fly at a safe altitude above ground level. This method is commonly used for conducting geological surveys, ice thickness measurements etc. 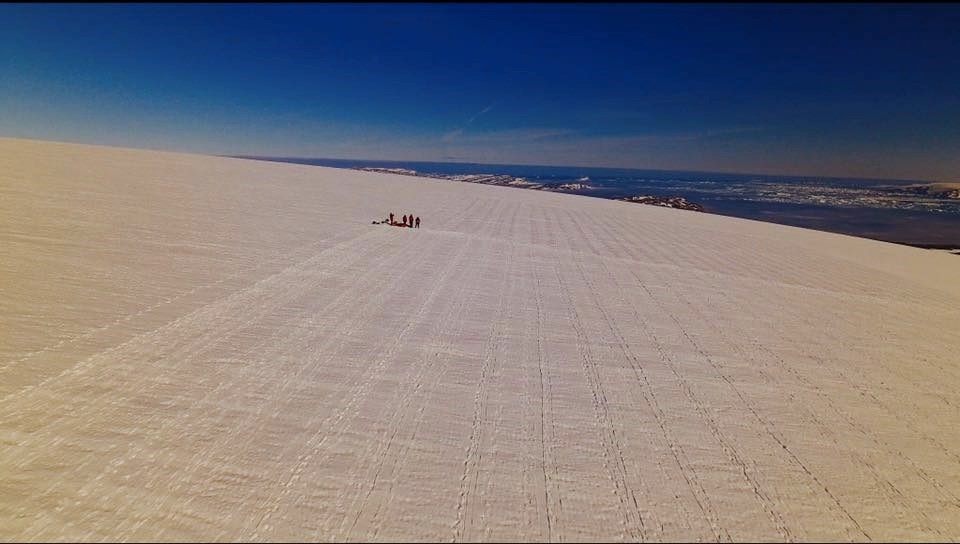 Figure 3. Surveying a grid in remote Greenland with GPR antennae mounted on the sledge.

In most cases, GPR surveys are a hard work and can be very dangerous for field personnel due to harsh topographic environments and weather conditions.

This is where drones come into play. They are lightweight (compared to a manned airplane or a helicopter), easily transportable by car and capable of flying autonomously at low altitudes with high precision. Such approach assures delivery of accurate survey results, is also safer for personnel and more time-efficient.

SPH Engineering was approached by Jim Salazar, the executive director and founder of Hot Point Solutions and the Fallen American MIA Repatriation Foundation (FAMIARF), dedicated to finding the remains of servicemen who lost their lives during WWII and other conflicts. FAMIARF, working with the

Department of Justice (DOJ), the Defence POW/MIA Accounting Agency (DPAA), the U.S. Coast Guard, and private sector companies and universities had been seeking a more effective way of locating aircraft that had crashed and subsequently been buried beneath the icecap.

As the photos (Figure 2 and 3) demonstrate, identifying the location of a crashed aircraft is a daunting proposition, and that, coupled with the idea that these planes can be hundreds of feet below the ice cap, necessitated a whole new way of surveying large areas safely. Convinced that the future of efficient geophysical exploration is through newer methodologies, Jim Salazar and his cold region team needed a solution that can be used worldwide, including polar regions, in order to effectively search for ferrous metals deep below the terrain.

Through SPH Engineering’s interaction with FAMIARF, the idea of integrating a GPR system with a drone was formed, and a lot of hours were invested to develop a fully automated programmable heavy lift drone coupled with a high power lightweight radar system.

Video explaining the technology behind the integration of GPR and a drone:

GPR and drone integration in detail

The setup of the GPR-drone integrated system is straightforward, as displayed in Figure 4 - the GPR is mounted on the bottom of a common commercially available drone between the landing gear. 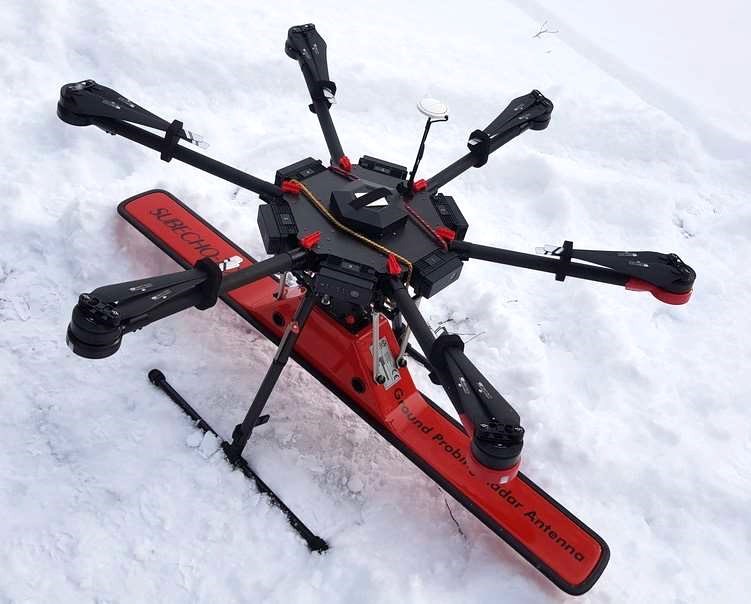 Radarteam Cobra Plug-In GPR, but the antenna is different in each setup:

Antennas differ in their frequency range and centre frequency.

SE-70 has a centre frequency of 80 MHz and can penetrate the ground more – up to 80 meters in good conditions (ice or dry sand).

SE-150 has a centre frequency of 124 MHz and penetration up to 40 meters in good conditions, however, the resolution is much better.

Table summarizing the main characteristics of the GPR-drone integrated system:

Current the GPR-drone integrated system can be used in areas where deep ground penetration is required but a good resolution is not very important.

Examples of applications include:

The GPR-drone integrated system enables to measure the depth of water or profiling the bottom of freshwater rivers, lakes, ponds up to 15 meters in depth.

Benefits – possibility to do work even when the water is frozen or the surface of the water is partially covered with ice. Compared to bathymetry using a boat (equipped with echo sounders) the drone with a GPR provides better accuracy in following survey lines thanks to the inbuilt GPS and automated flight. Also, in most cases, a drone makes it a lot easier to deliver the necessary equipment to the desired area.

The results displayed in Figure 5 were gathered with the drone flying at an altitude of 20 meters above the water surface level to profile 8 meters deep frozen lake. 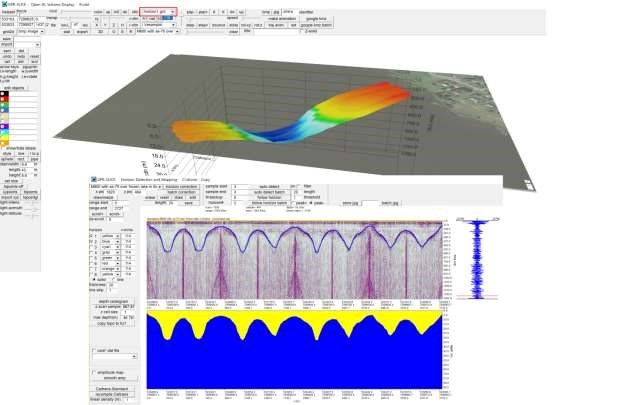 The 3D visualization of the lakes profile was created using GPR-Slice software (http://www.gpr-survey.com).

Soil layer profiling is a standard task that needs to be done before any serious area development or construction works. The standard technique is drilling dozens of holes or conducting a GPR survey on carts.

Data gathered by GPR-drone integrated system flying at an altitude of 5 meters over an asphalt-covered car parking lot is displayed in Figure 6. The soil layers are clearly visible.

Figure 6. Layers of the soil below a parking lot measured up to a depth of 36m.

Please note that the current GPR-drone integrated system does not enable to map small or thin objects such as cables or thin pipes. It is capable of detecting objects with an approximate size of 5 - 10% of depth, such as concrete sewage channels, tunnels, bunkers, etc.

The drone is made by DJI, the radar by Radarteam Sweden. What’s the role of SPH Engineering?

SPH Engineering developed the on-board data logger and the support of GPR in the ground control software for drones - UgCS. SPH Engineering also made hundreds of test flights with the GPR-drone integrated system to make sure the system is optimized for real-world use.

Of course, it is possible to fly with GPR mounted on a drone without any integration attaching the tablet computer to the top of drone. The first dozen test flights were made with this simple configuration, initiating the idea for integration. 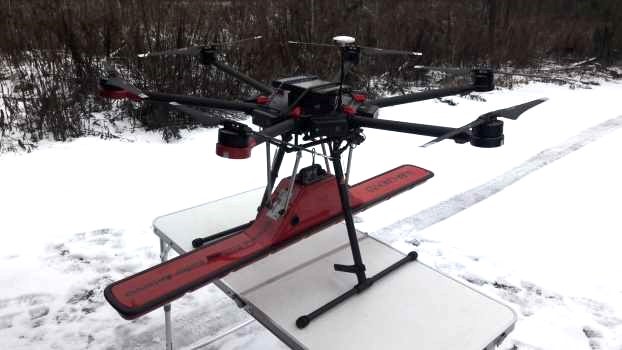 Figure 7. GPR and tablet mounted on the drone, i.e. without integration.

The simple configuration can lead to manual errors: the radar or data logging is not switched on before launching the drone, or the data logging is not stopped and saved after landing. Another limitation is that it is not known what the GPR sees while being in the sky until it is returned to the office and acquired data is being processed. Also, the water droplets on the screen of the tablet computer will drive it crazy.

The GPR-drone integrated system provided by SPH Engineering displays the radar status and current trace on the screen of the ground station UgCS. Data logging is started automatically at take-off and finished upon landing. 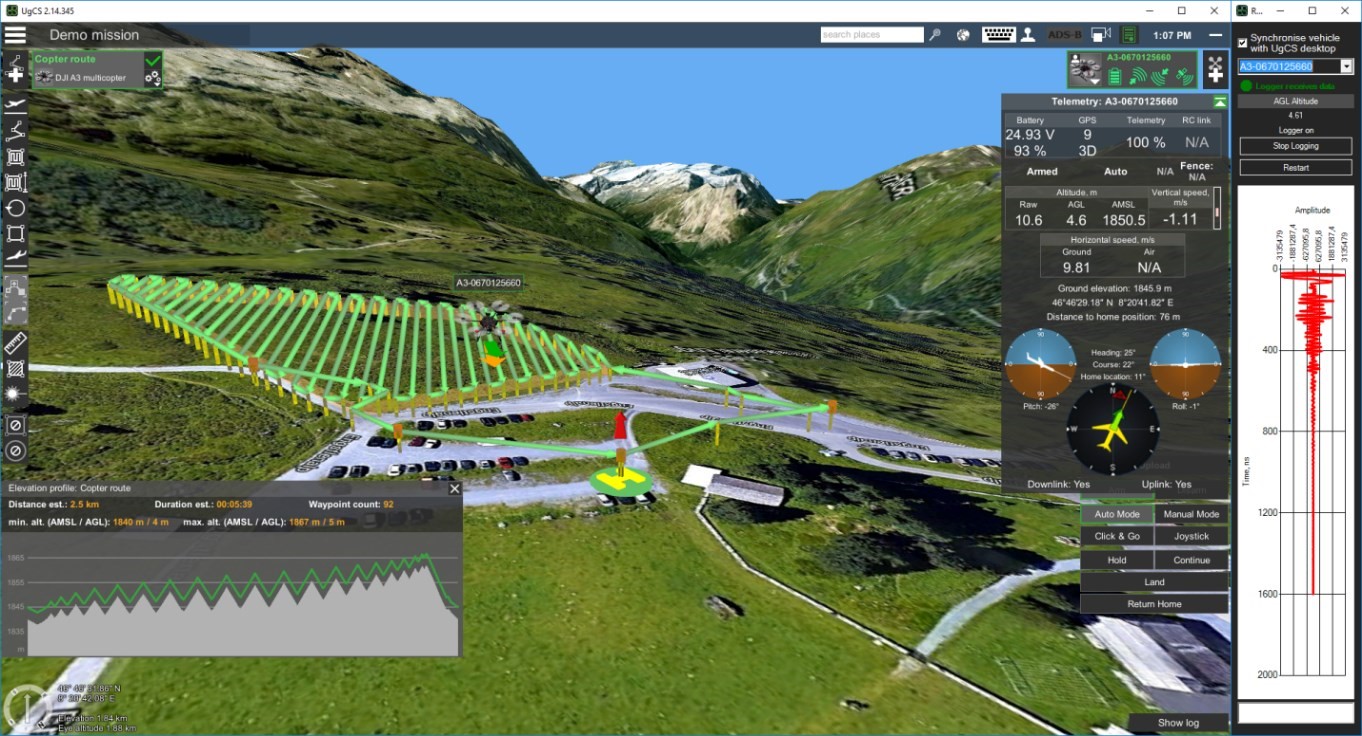 Can GPR be used for the bathymetry of salt water?

No, unfortunately, bathymetry of salt water is not possible. Saltwater serves as an almost perfect shield for radio waves.

How the radar’s footprint can be determined knowing the altitude of the drone and estimated depth of the target?

SPH Engineering provides calculations of the radar’s footprint for customers of the GPR-drone integrated system.

How drone survey missions for such specific sensor like GPR have to be planned?

What is the recommended flight altitude for GPR?

It is recommended to flying as low as possible. Low altitude means - smaller radar footprint on the target level and better resolution. M600 Pro drone is capable of safely flying at an altitude of 5 meters AGL for an automatic mission if accurate terrain elevation data is used.

What is the recommended speed of the drone with GPR?

Can the GPR-drone integrated system be flown in manual flight mode?

Theoretically yes, but from our experience, most probably the data obtained will contain a lot of noise. It is recommended to use automatic missions only.

Can small objects be detected, such as land mines, using the GPR-drone integrated system?

No, not this system. A version of the system with a high-frequency radar will be available soon and it will be capable to detect small objects at a depth of 4-8 meters depending on soil and characteristics of the target.

Can underground tunnels be detected and mapped using the GPR-drone integrated system?

Yes, it is possible. 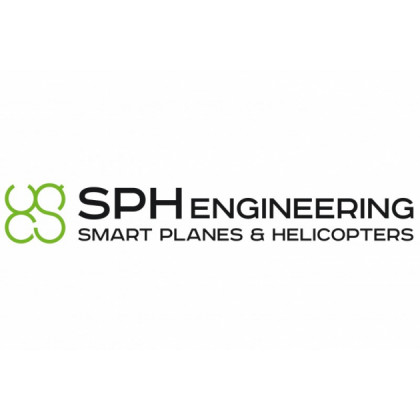 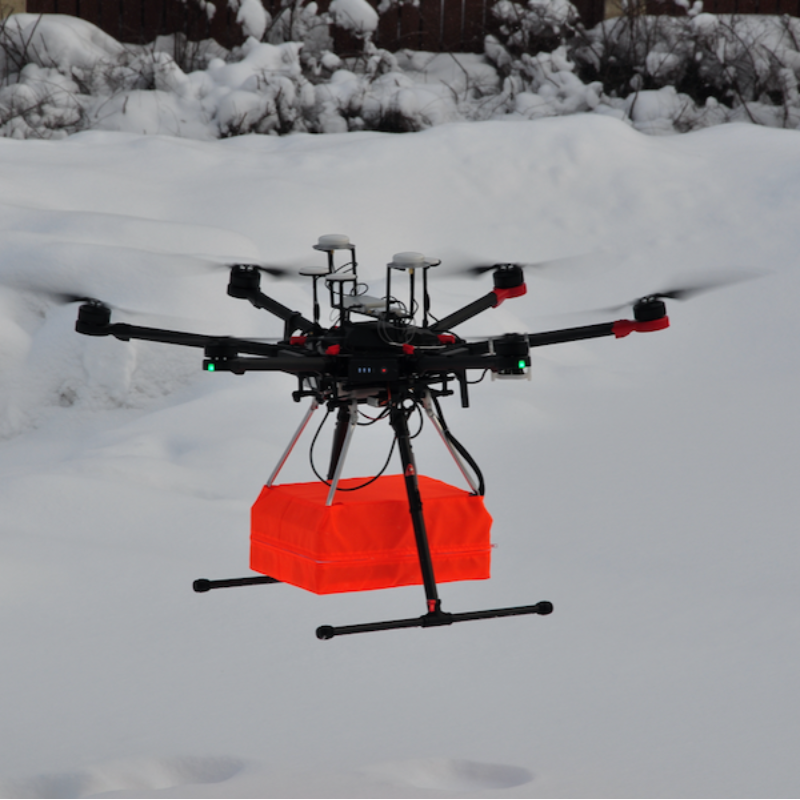 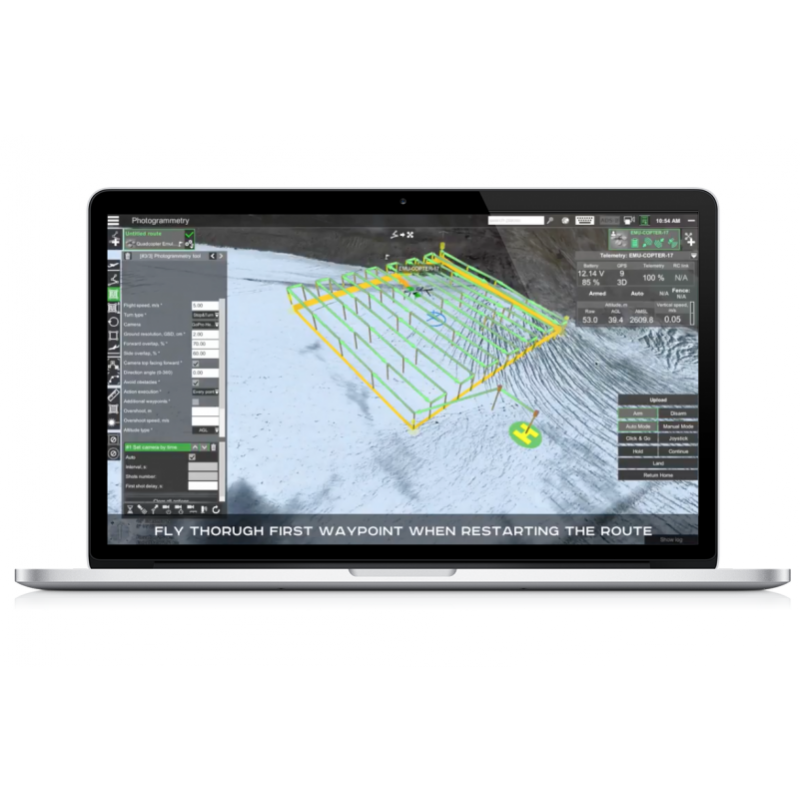 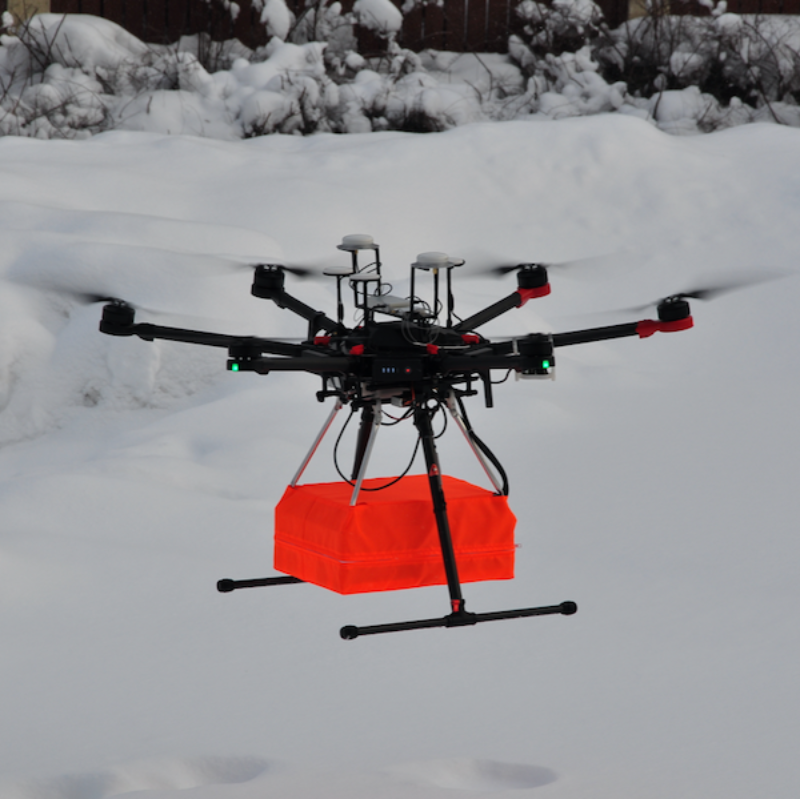