Identifying Oil in Water with Fluorescence and Backscattering Instrument

The Sea-Bird Scientific SeaOWL UV-A™ (Oil in Water Locator) instrument is designed to detect sub-surface oil in natural waters. The SeaOWL™ incorporates lessons learned in responding to the Deepwater Horizon oil spill event and in subsequent scientific research. The SeaOWL™’s Fluorescent Dissolved Organic Matter (FDOM) sensor provides a factor of five increase in sensitivity compared to the ECO line of instruments used in the Deepwater Horizon response. The increased sensitivity in the SeaOWL™ FDOM sensor resulted from improvements in both the optics and electronics.

Signal confirmation of the presence of oil from FDOM sensors is enhanced in the SeaOWL™ by placing multiple sensors in a single housing. Because oil in water is present in both dissolved and particulate phases, the SeaOWL™ incorporates a backscattering sensor which responds to the total particulate concentration. The chlorophyll fluorescence sensors allow for discrimination of
oil from natural phytoplankton populations.
Single channel UV fluorometers were effective in detecting oil during the Deepwater Horizon event because the source of the oil was high and the position known. In more complex environments where sources of oil are less well defined, the SeaOWL™’s corroborative data streams increase confidence in oil detection.
For general work, such as detecting leaks from existing structures, tracking smaller plumes, and distinguishing natural seeps from anthropogenic sources, discriminating oil from other  fluorescing substances is more challenging. This is especially true in highly variable environments such as shallow waters and where significant fresh water sources exist.
In this white paper we present data from experimental work on the fluorescence and backscattering signals where the oil was treated with differing levels of dispersant and discuss results from a field test of the SeaOWL™ performed by Blue Ocean Monitoring using an autonomous glider and a target oil release. 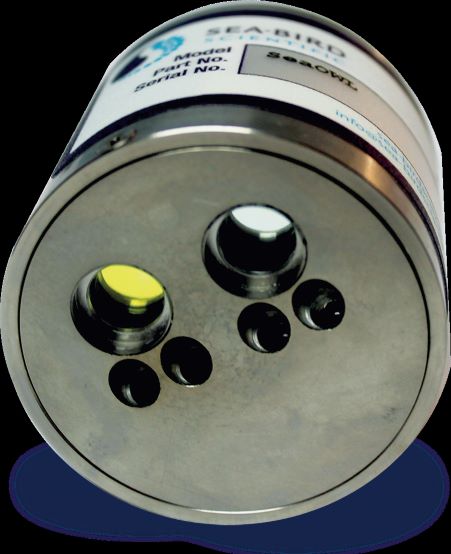 Fig. 1. The SeaOWL™ sensor. The large openings in the face of the titanium housing are the detectors. The small openings house the excitation LEDs. The left-hand LEDs are 470 nm for stimulation of chlorophyll fluorescence and 700 nm LED for backscattering. The right-hand side sensor uses two 370 nm UV LEDs for measurement of FDOM. This allows for a higher photon flux into a wider and deeper depth of field for enhanced detection of oil as compared to the ECO design. 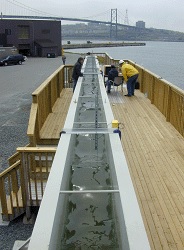 Fig. 2. The flume at Bedford Institute of Oceanography’s Centre for Offshore Oil, Gas and Energy Research (COOGER) facility
where the data for this comparison was collected.

We estimate the relative increase in resolution between the Sea-Bird Scientific ECO CDOM fluorometer calibrated for oil and the SeaOWL UV-ATM by comparing the calibrations of the instruments using quinine sulphate dihydrate.

The estimated limit of detection (LOD) for the ECO CDOM fluorometer is < 300 ppb crude oil (Conmy et al., 2014), i.e. 30 counts. Using the same count to LOD relationship, we estimate that the LOD for the SeaOWL is < 67 ppb crude oil. Given improvements in the optics and electronics between the two instruments further investigation should demonstrate a lower effective LOD for the SeaOWL.

Caution should be exercised in using calibrations and LOD’s from specific oils, injection methods and DOR’s for a specific environment and oil. As with optical calibrations in regards to biogeochemical parameters such as chlorophyll concentration via fluorescence and absorption and total particulate concentration via backscattering and beam attenuation, the range of natural variability suggests that factory calibrations should at least be supplemented by co-located grab samples and regression analysis.

Effect of Dispersants on Fluorescence and Backscattering Response

The presence/absence of oil in water can be constrained by comparing the FDOM signal from known uncontaminated water with that measured in a contaminated water mass. That relationship can be further constrained by establishing an FDOM/salinity tie line which for most of the world’s oceans is negative, i.e. the FDOM signal is highest in fresh water and lowest in high salinity sea water. The backscattering to FDOM relationship has more degrees of freedom within an oil plume as the initial injection will establish a particular particle size distribution, and the composition of the oil will constrain the amount and rate in which oil fractions dissolve into the water mass. As a plume ages (moves away from the source) chemical, biological and physical processes will change the nature of the oil in the plume, especially with respect to the fractional division between dissolved and particulate oil and the size distribution of the oil particles.

One of the goals of using dispersants on oil in water is to break up slicks and reduce average particle size of the oil. Hence, effective dispersant loading will result in an increase in fluorescence and backscattering signals. Testing of dispersant loading at the COOGER flume facility shows that the SeaOWL™ effectively captures this relationship (Figure 4). As loading increases a critical point is reached and both the FDOM fluorescence and backscattering signals show dramatic increases. In this experiment, we have assumed that the time horizon was too short (minutes) to see a shift in the signals due to a shift in oil mass from the particle to the dissolved fraction during the progression of the plume. Rather, the dispersant increased the backscattering signal relative to the fluorescence signal. 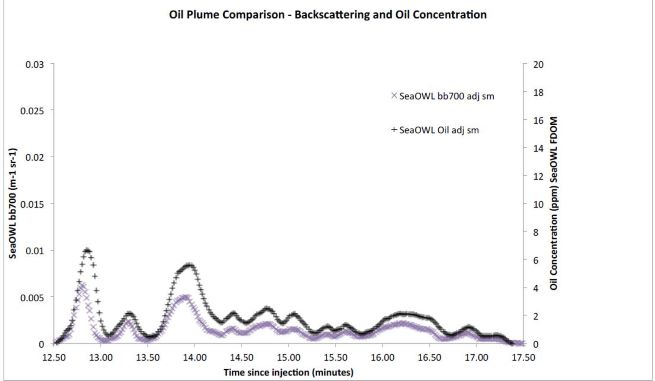 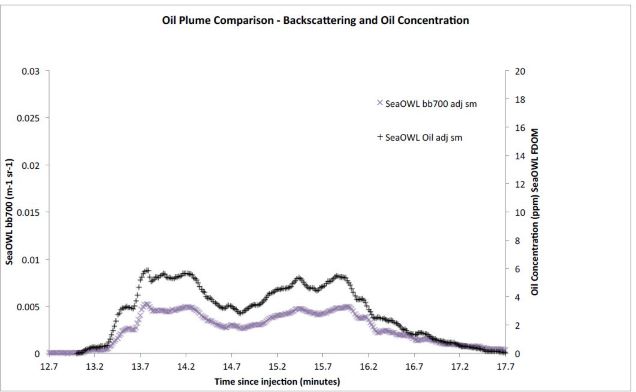 Fig. 4. Time series of a plume of Alaska North Slope oil as it passes the SeaOWL™ in the COOGER facilities flume for the same concentration of oil treated with increasing loadings of dispersant. Both the fluorescence and backscattering signals increase as the dispersant loading increases. A critical point is reached between the 1:100 and 1:20 experiments as the backscattering signal increases by roughly a factor of five while the fluorescence signal increases by a factor of three. The coherence between the backscattering and fluorescence signals is very high in all three experiments 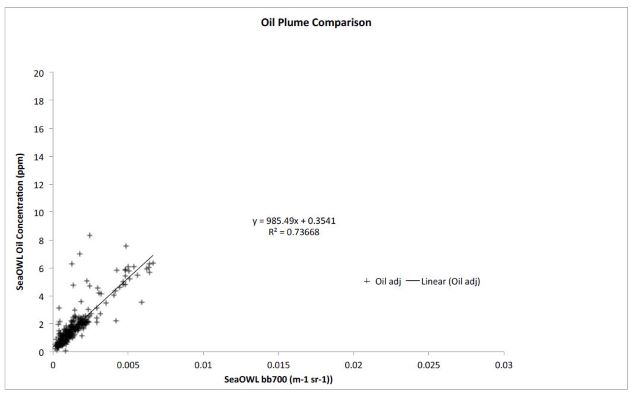 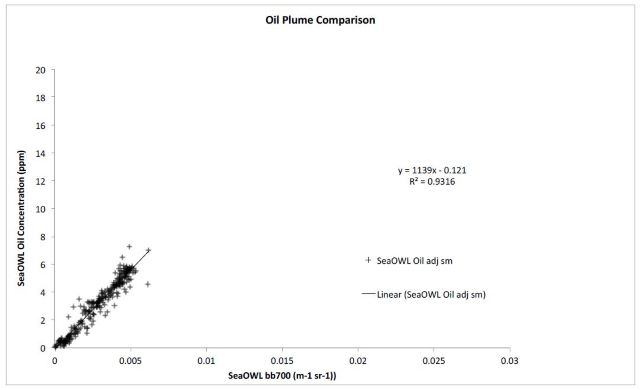 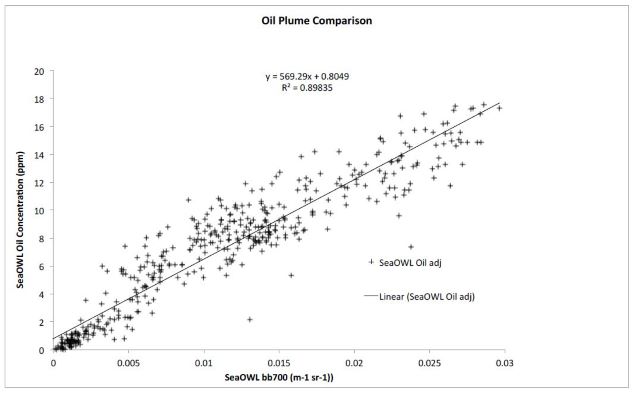 Fig. 5. Property vs. property plots of the fluorescence and backscattering response from three flume tests of Alaska North Slope oil using different dispersant oil ratios (DOR). The same mass concentration of oil was used for all three tests, only the dispersant loading was changed. The critical point between as noted in Figure 4 is demonstrated here as a decrease in the slope of the relationship.

In 2017, Oil Spill Response Limited (OSRL) conducted a licensed oil-on-water exercise to understand how remote sensing technologies can help detect oil spills at sea more effectively. Blue Ocean Monitoring was contracted to provide data during the exercise which involved the use of dispersant and other physical control methods to contain oil spill plumes. Five hundred liters of crude oil was released at a location in the English Channel and sprayed with twenty five liters of dispersant, a nominal DOR of 1:20.

Blue Ocean Monitoring deployed their Teledyne Webb Research (TWR) Slocum G2 Glider (Glider) with a Sea-Bird CTD and SeaOWL™ for measuring the oil plume. Blue Ocean Monitoring uses Gliders for far field monitoring, i.e. for large spatial and temporal coverage particularly for near land-fall areas as well as for near field plume and plume edge detection. Within the plume, Blue Ocean Monitoring uses mini and micro unmanned underwater vehicles (UUVs) for temporal and spatial evolution of the plume as UUVs can be deployed to transit along and across sections of the plume at fixed depths, particularly near the surface where oil in water data is the most critical.

The use of autonomous gliders and mini UUVs in an oil spill event enhances the ability of the responders to collect data over a larger volume in a given time than is generally possible with the use of profiling or towed instrumentation from manned vessels. Additionally, gliders and UUVs can be deployed from ships of opportunity with relatively little training as compared to traditional oceanographic sampling methods.

In this exercise the Glider started in the far field providing absence of and baseline measurements. The glider then came into the near field to define the plume in more detail.

Fig. 5. Cross section (above) and 2D surface plot (below) of crude oil data calibrated from SeaOWL™ FDOM data using results from (Conmy et al 2014). Surfacing times are indicated in figure (b). The Glider was transiting through the location of the plume during this transect as was confirmed by the response of the SeaOWL™ FDOM sensor. Figures courtesy of Blue Ocean Monitoring.

Fig. 6. The backscattering data from the SeaOWL™ along the same cross section as in Figure 5 presented with respect to depth and time (above) and time (below) to enhance the visibility of the increase in backscattering at the surface. It is likely that the enhanced backscattering whilst the Glider was drifting on the surface between 0715 and 0730 reflects the injection of oil droplets in to the water column after the application of dispersant. Figures courtesy of Blue Ocean Monitoring.

The objective of the Oil Spill exercise was to demonstrate efficacy of Autonomous platforms to detect and quantify the oil plume while informing clean-up operations. Fundamental to this goal was to demonstrate that gliders can be deployed, operated and recovered safely in the challenging environment of an oil spill response. The Sea-Bird CTD and SeaOWL™ sensors on the glider provided the confirmation that the Glider deployment could detect and track the extent of the oil plume. Finally, the ability of the Glider to communicate in near-real time to Blue Ocean Monitoring’s operations and visualization team demonstrated that the in-situ sensors and control system of the gliders provides a flexible platform for operational guidance of the oil spill response team’s assets for effective management of the response. 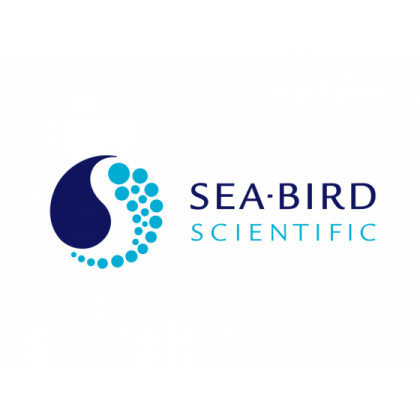