The port of Helsingborg in Sweden wanted to expand to be able to receive 250-meter-long vessels. A critical factor in this process was to provide correct real-time information on currents and winds to pilots and arriving ships. 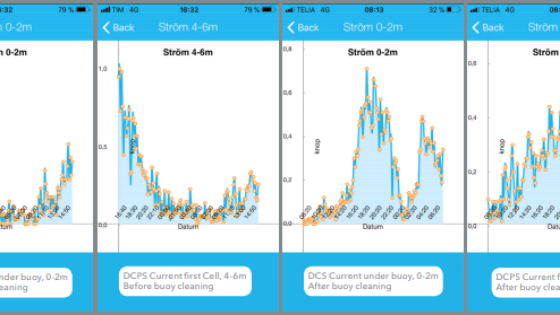 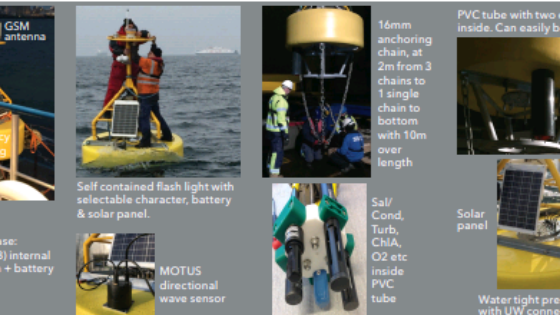 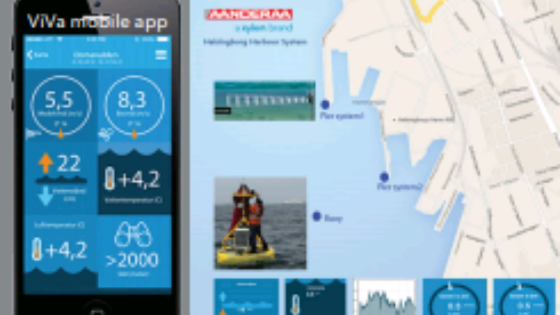 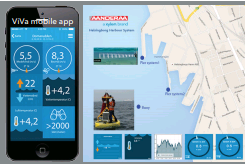 Fig 1: Overview of the placement of the buoy and the side-looking pier systems

In the beginning of 2016 two side-looking pier systems and one buoy were installed in the area. The pier systems are measuring current speed and direction two meters below the surface in the middles of two major harbour entrances (Figure 1). A YSI EMM 2.0 buoy was installed at about 500m outside the harbour where currents are stronger, up to four knots.

The buoy was equipped with a single point Doppler Current Sensor (DCS) for measurements at one meter below the surface and a Doppler Current Profiler Sensor (DCPS), pointing downward, to cover the rest of the water column, with two meters cells down to the bottom at 30m depth.

For mechanical protection and easy maintenance the sensors are mounted inside a retractable PVC tube that penetrates the buoy hull (Figure 2). Data from the two sensors and an external compass, installed on top of the buoy away from the magnetic disturbances of the mooring chain, are logged onboard the buoy by a SmartGuard logger. Power comes from solar panel charged batteries. The logger is connected to a mobile phone modem and transmits pre-selected information every 10 minutes to the Swedish ViVa system where data from more than 100 stations are publicly available on the Internet, on a free mobile phone application (search for ViVa) and transmitted to the electronic charts of ships in the vicinity of a station over AIS (Figure 1).

Fig 2: Some of the equipment used

The three current measuring systems have become a vital part of our daily operations says the Helsingborg Harbour Captain Mikael Hultgren. The pilots use the buoy information to plan the approach of larger vessels and the pier systems when entering. Conditions are often surprisingly different in the open water outside compared to the entrance. The Sweden-Denmark ferries, there is one departing every 15 minutes, are used to the navigation here but still find the systems valuable. The ViVa application showing our data has also become popular among local boaters, fishermen, anglers, sailors, wind surfers and others enjoying these waters.

In the biologically active season, March-September, the biofouling on the buoy is important and will eventually hamper the free circulation around the buoy. Acoustic current sensors send out pulses into the water away from the sensor itself and are normally relatively insensitive to bio-fouling. In this case, where the upper single point side looking Doppler Current Sensor (DCS) is placed directly under the buoy, high fouling will be visible as reduced and noisier speed-readings.

It is possible to follow in real time when it is time to clean the buoy because there are two current sensors— DCS and DCPS—on the buoy; the DCPS always measures in free water below the buoy. Figure 3 shows an example illustrated by mobile phone screenshots from the ViVa application before and after cleaning. The dominant situation in this area is that currents at one meter depth (from DCS) and at five meters depth (from DCPS) track well, both in speed and direction, but when winds are low or in the same direction as the surface currents its magnitude is higher. When winds are against the surface current, then its magnitude is often slightly lower. When the buoy is heavily fouled, before cleaning, the DCS (first screenshot) gives significantly lower speed than the DCPS. After cleaning, the situation is back to normal with higher speed recorded by the DCS. It is recommended to clean the buoy and pier systems, done by divers, once in the summer and once in the fall. The envisaged service/calibration/check interval of the systems is five years.

Please follow the links to find out more about our navigational buoy packages, why broadband is not suitable on moving buoys and examples of flawless buoy operations in up to 18m waves off the coast of Norway.

Fig 3: Mobile phone screenshots of ViVa application showing data from the buoy before and after cleaning

Do you want to get in touch with Aanderaa Data Instruments after reading this article? 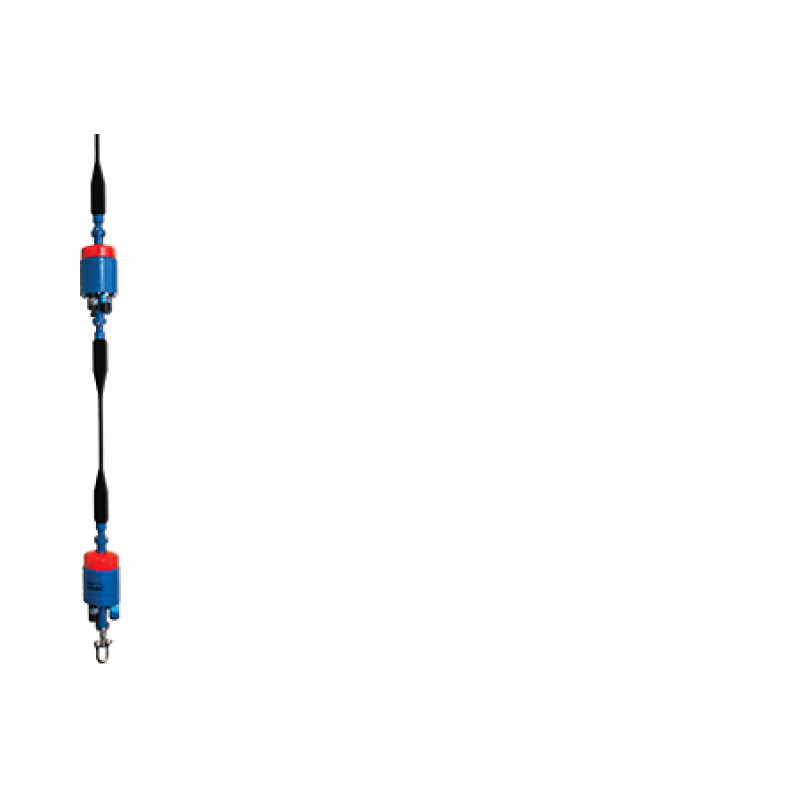 The Aanderaa Current Sensors are based on the backscatter acoustic Doppler principle.