This LiDAR survey story came from Hong Kong, across which Typhoon Mangkhut made its deadly march in mid-September 2018. The super typhoon was reportedly considered as the strongest storm anywhere on the planet last year as well as the strongest tropical cyclone to hit Hong Kong in decades, unleashing dangerous winds, pounding rains, widespread flooding, terrible landslides and leaving hundreds of people injured and dead where it made landfalls. 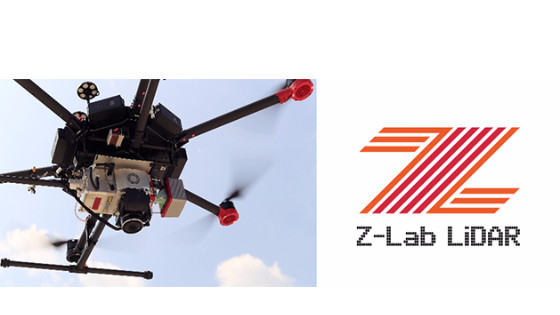 Well-engineered coastal infrastructure was severely lashed by the super typhoon.

This LiDAR survey story came from Hong Kong, across which Typhoon Mangkhut made its deadly march in mid-September 2018. The super typhoon was reportedly considered as the strongest storm anywhere on the planet last year as well as the strongest tropical cyclone to hit Hong Kong in decades, unleashing dangerous winds, pounding rains, widespread flooding, terrible landslides and leaving hundreds of people injured and dead where it made landfalls. As Mangkhut ripped through the city, the ferocious gale-force winds blasted out windows and downed trees (see Fig. 1 & 2), crippling downtown and its transportation network. Meanwhile, the storm surge brutally battered also the coastal areas where were particularly hard-hit with rapid flooding and wind attack.

(Fig. 1 & 2, the aftermath of Typhoon Mangkhut in Hong Kong)

The survey zone in this mission is actually the seawall armor situated right on the seafront of a university campus, which unfortunately bore the brunt of massive flooding and devastations. In other words, the destructive gusts and rains resulted in the leaky seawalls and structural damages. Seawalls, otherwise known as retaining walls, are the steel, stone, or concrete structures that commonly border the shoreline. The rock-fill sloping seawalls (see Fig. 3 & 4) of this seaview campus serve as an important barrier in defending against flooding and erosion. But for the record-breaking typhoon, the seawall amour would have remained its solid bastion shape as usual. Now it appears different from what it used to be, as evidenced from the existing alignments of some disordered stones. The weakened foundation associated with soil instability and typhoon-induced scour, though only a few small parts impacted, might cause further structural failures and more breakaway walls. Consequently, the local authorities intend to have it restored systematically to continue protecting the coastal lines and benefiting the campus both.

Which survey methodology could satisfy all needs of the mission employer?

This survey job is to collect the seawall topography for further analysis and research, as maintaining the strong and stable seawalls is of utmost significance in times of rising sea levels, or future disaster threats. It seems quite easy to go with conventional ground measurements for this seawall topography because surveyors could manage to access the shoulder, the slope and even the foot of the seawalls (see Fig. 5) while putting operator safety aside. Yet, the sturdy seawall was well engineered to be concave on its seaward side between the shoulder and the slope so that the waves would be deflected upward instead of striking the armor body hard. And as a result, it might be difficult to measure the concave downward (see Fig. 6) by GNSS RTK, even with the latest tilt sensing technology. Furthermore, there are still some blind spots, like the turnings, which might be invisible to total station and terrestrial laser scanner, especially when such tripod-mounted instruments are forced to set up on the 2 beach corners or onto the seawall shoulders. Obviously, failures to conduct some measurements might lead to certain data gaps and insufficient data reference. On the other hand, accumulative errors would inevitably occur in case of repeated station movements. All in all, it’s really hard to manifest the surface of uneven seawall slopes, composed of many irregular rocks, by measuring one group of dots after another.(Note: the 2 pictures below were borrowed from internet.)

In addition, the employer expects to obtain not only digital elevation model, the most fundamental output of topographic data, but also geo-referenced yet colorized point cloud with high point density, through which the leaks of the rocks (see Fig. 7 & 8) could be visualized and measured in 3-dimensional perspectives. Point cloud, visualization, and 3D may collectively come up with oblique photogrammetry likewise, generally speaking. However, due to photogrammetric principles, the elevation accuracy control could not go down to centimeter level unless a number of ground control points are input and tied for further aerial triangulation computations. And such GCP measurements and establishments would typically run into remarkable manual efforts, which makes not much difference to regular RTK survey.

Nooks and crannies. Contactless. Massive data. In no time.

Considering that all other methodologies might not satisfy the needs according to the employer, the Z-Lab team proposed to utilize UAV-based LiDAR survey that features mass data driven strategies. In the job, Z-Lab LiDAR SZT-R250 and DJI drone M600 Pro were in service. It was always enjoyable to capture massive data in a contactless way, especially when the survey work was being conducted somewhere hard to reach or measure. And the vertical take-off and landing function of the multi-rotor well suited to this job, as the employer looked forward to both high output accuracy and high point density. “For effective data captures of the concave bodies, we shifted the flight routes a bit outward instead of straight overhead of the seawall shoulder (see Fig. 9 & 10). In that case, the laser scans from the LiDAR sensor downward will most probably get into all those nooks and crannies.” said Jerry Xie, the smart young product engineer in charge of the entire fieldwork alone, from flight planning to aerial mission.

Eventually, the Z-Lab team spent around 7 minutes to fly and scan this 430-meter-long and 3-meter-wide seawall amour. But, can you imagine how long and how much it would take to accomplish it in the field with total station, or GNSS RTK, or terrestrial laser scanner, or mapping drone individually? Definitely, it requires considerable labors, with whichever equipment, to challenge this site and achieve the demanded high accuracy, saying 10cm in plane and 15cm in elevation.

The flight zone, less than 2 hectares, was very tiny indeed and therefore a few hours was enough for Z-Lab team to finalize all processing segments such as trajectory data, geo-referenced point cloud (see Fig. 11), orthophoto map, then colorized point cloud. Fortunately, the point cloud for the solid seawall part actually did not contain any vegetation or other objects so it could be directly produced into digital elevation model that represents the current coastal infrastructure conditions. In comparison with the 40+ checkpoints measured by employer’s RTK team (see Fig. 13 & 14), the standard deviation in Z direction was limited down to 4.8cm (see Fig. 12) as shown in the control report exported from TerraSolid, a third-party software kit well known for point cloud applications. Then followed the colorized point cloud (see Fig. 15 & 16) with 3D perspectives and color textures, which was further generated based on geo-referenced point cloud and orthorectified image. It’s assumed that the responsible party might refer to this key output for deep studies, like how to evaluate the structural changes and deal with the reinforced infills more scientifically. That’s why higher point density from LiDAR point cloud, compared with that from photogrammetric point cloud, is of greater reference value for this seawall armor restoration project. For some reasons, the lack of feature points and big-sized marks inside the point cloud left a question mark in horizontal accuracy verification, but anyway it could be inferred that the deviations of XY value would easily reach centimeter level due to comparably flat terrain along the shore and the low flight altitude, 25m AGL (Above Ground Level). This new technology has become a very promising alternative option.

Nobody will say any survey equipment is the best or the most powerful. Instead, it’s commonly believed that one of these methodologies, or one packaged combination, might fit a particular mission the most when certain job details are taken into consideration, like the environment, terrain condition, traffic concern, time limit, budget, etc. Anyhow, the solutions shall be optimized from case to case.

In the story, the team have proved their capability and productivity in terms of Z-Lab LiDAR solutions. And this awesome case study tells us LiDAR survey enjoys single approach, one-man operation, output diversity, accuracy control and job efficiency all at the same time, which prevails over any other survey methodology in above mentioned aspects. In summary, the Z-Lab team help to well illustrate a very promising alternative option in the survey world with their project-based learnings and field-proven technologies.

Do you want to get in touch with SOUTH after reading this article?