A 74 year old World War 2 mystery has been solved by using an array of subsea survey technology including Valeport equipment. 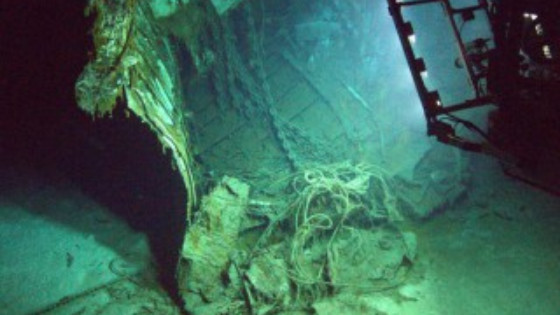 As recently reported in various media, the mystery surrounded just what caused the loss of 645 crewmen when the HMAS Sydney sunk on 19th November 1941.

The Australian vessel had gone missing following a battle with the German cruiser Kormoran, which also sank. It was never known why HMAS Sydney sank so quickly as it was relatively much larger than it's opponent.

The final resting place of the HMAS Sydney was discovered in 2008 off the West Australian coast at a depth of 2000 metres. The image opposite (courtesy of Ashtead Technology) shows the torn off bow from the wreckage.

To help solve the mystery, Ashtead Technology were approached by DOF Subsea on behalf of the Western Australia Museum (working with Curtin University) and were asked if they could supply the right mix of subsea survey equipment to help solve this long standing enigma.

As this was a war grave site, great care had to be  taken so as not to disturb the immediate and surrounding areas and to ensure the integrity of the site.

The survey work was able to show the ship had a 15-cm shell hole through the compass platform at the bridge. The damage would have disabled the vessel's control systems and meant that the HMAS Sydney would struggle to defend itself, quicklybeing overcome by it's enemy with the loss 645 lives.

Do you want to get in touch with Valeport after reading this article?