This article evaluates the positioning precision of UWB in familiar indoor environments for consumers. 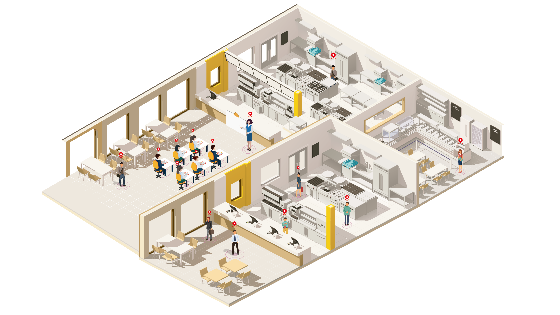 Abstract: With the increasing trend of having built-in chips in mobile terminals, UWB technology, which features high-precision positioning, stability and low-power consumption, is moving closer to the consumer-grade market and will engage more in providing higher level location-based services. This article evaluates the positioning precision of UWB in familiar indoor environments for consumers. The results of the experiments verify that UWB’s precision and accuracy could reach centimeter-grade quality with good stability for common scenarios, improving the applicability of this indoor positioning method.

1    Introduction
UWB technology has many advantages, such as high anti-interference performance, high transmission rate, low-power consumption, greater security, and so on. This can theoretically provide high-precision centimeter-level positioning in the indoor environment. However, the layout of partitions and decorative materials in typical indoor scenarios, and the placement of objects and even the movement of people leads to wireless signal propagation by multipath and non-visual distance interference [1], thus reducing positioning accuracy. To eliminate non-visual distance errors that affect the positioning effect, the raw observations are generally corrected by Kalman filtering at the algorithm level. This ensures a more stable positioning result and a relatively smooth motion trajectory in the system output. However, the random position of indoor objects and people walking about can lead to positioning errors caused by absorbing and blocking of the signals. Consequently, the signals can’t be well processed by the Kalman filter [2], and just using the empirical parameter model for the correction can still cause the positioning error, as it is too large to meet the actual application’s needs.
Therefore, this article tests and evaluates the positioning effect of UWB in a typical indoor environment through experimental design in order to verify the positioning effect and accuracy of UWB technology in practical applications.

2    UWB positioning method
UWB technology with a frequency range of 3.1 GHz to 10.6 GHz was approved for civilian use by the Federal Communications Commission (FCC) in the early 21st-century. It must operate at low enough power to ensure that it does not interfere with other systems in the communications frequency band. This initiative has contributed significantly to the development of technology. At present, UWB is generally divided into two categories; one is short pulse UWB and the other is multi-carrier UWB. Pulse UWB technology is predominantly used in academic research and commercial solutions because it allows more efficient use of the spectrum [3]. This technique transmits data by using extremely narrow pulses at a nanosecond or even picosecond level with very high temporal resolution. There is no need for power amplifiers, inverters or mixing techniques, and the hardware cost and volume are greatly reduced [4].
Common UWB positioning methods include Time of Arrival (TOA), Time of Flight (TOF), Two Way Ranging (TWR), Time Difference of Arrival (TDOA), Angle of Arrival (AOA), Angle of Departure (AOD), and Received Signal Strength Indication (RSSI), which are all briefly described below.

2.1   TOA
TOA refers to the system's ability to determine the location of a signal source by recording the time it takes for the UWB pulse to travel from a location tag (Tag) to more than three different location base stations (Anchor) for the distance measurement.
Assuming that the positions of the three anchors, A, B and C, are known, d_1, d_2 andd_3 are the distances from each anchor to the tag O. d_1, d_2 and d_3 can be derived from the time and signal propagation speed. The position of point O is calculated according to the triangulation principle.
The TOA algorithm requires the anchors to be in strict time synchronization with the receiving end; otherwise, a ranging error will occur.

2.2   TOF/TWR
TOF/TWR is a two-way distance measurement. It uses the signal transmission time in the tag-anchor-tag to calculate the distance between the tag and each anchor, so the principle is the same as TOA. For TWR, both the tag and anchor need to be able to send and receive signals.
In this way, errors caused by clock deviations can, to a certain extent, be reduced and the measurement accuracy improved. However, due to TWR, there is increased power consumption at the tag end compared to the one-way ranging method, and the tag capacity of the system is also limited.

2.3   TDOA
The TDOA-based positioning method, also known as hyperbolic positioning, measures the difference in propagation time between the UWB signal from the UWB tag to two UWB anchors to get the fixed distance difference between the UWB tag and two UWB anchors. The TDOA algorithm is an improvement of the TOA algorithm. Instead of directly using the signal arrival time, it uses the time difference of the signal received by multiple UWB anchors to determine the location of the moving target.
The TDOA approach also requires strict time synchronization; however, the power consumption of the tag is relatively low, and it is easy for the system to carry a larger number of tags that work simultaneously.

2.4   AOA
The position of the tag can also be calculated when the signal incidence angle to the anchors can be measured.
Assuming that the positions of the three positioning anchors A, B and C are known, and the orientation angle of the tag to each anchor is known, then the coordinates of the O1, O2 and O3 centroids and radii can be derived to obtain the label coordinates.
The current common solution that uses AOA is the utilization of a single anchor with an integrated array antenna to reduce system costs, but the effective positioning area is generally small since goniometric accuracy and range are largely affected by the height of the anchor installation.

2.5   AOD
In contrast to the AOA approach, the integrated array antenna of the tag, which measures the angle of incidence of the signal by accepting the base signal, can be calculated directly at the terminal. However, there are no mature commercial solutions available at the moment due to the manufacturing process and size limitations.

2.6   RSSI
Similar to the common Wi-Fi/BLE approach, signal strength-based localization generally uses a signal attenuation model, or the measurement of RSSI parameter values in order to estimate the coordinates of tags [6].
A large number of project practices and studies have shown that, when the algorithm adaptation and implementation costs are taken into account, the TOF and TDOA methods can provide relatively reliable positioning accuracy, and are more suitable for practical applications.

3.1   System setup
The author's office area was chosen as the test environment. It conformed with the characteristics of a typical indoor environment, as people walked randomly through it, desks, chairs and objects were randomly placed, and there were metal shelves in the corner area. Furthermore, meeting rooms and special offices were separated from the main work area by glass and plasterboard.
Based on the object and spatialcharacteristics of the indoor environment, a total of 7 anchors were selected and installed at suitable locations. The relative coordinate system was then established using a total station, and the position of each anchor was measured using the non-prism function. The collected coordinates were then used to calibrate the entire positioning area. The horizontal coordinates of 5 control points in the relative coordinate system were acquired in the same way using a prism as the true value for the accuracy evaluation.
The hardware adopted, including tags and anchors, was provided by Locaris, and so was the TDOA positioning data processing engine.
The system structure adopted the classic UWB indoor positioning system architecture, which consisted of an indoor positioning tag, an indoor positioning anchor, a switcher and a server. The tag signal sent ultra-wideband pulses to the anchor, which received the pulses and forwarded the data to the server via a LAN switcher. A data processing engine was deployed on the server-side that used the data for coordinate calculation.

5    Conclusion
The test results of the experiment showed that UWB indoor positioning technology can provide stable horizontal positioning results. These have a precision level of about 10cm in a typical indoor environment. There is still some room for improvement in both the positioning accuracy and stability, which can be considered from the following two aspects.
In the algorithm, the introduction of inter-site measurements for proper parameter estimation and correction [7], or other models that can be flexibly corrected, according to the actual environment, can not only optimize the system’s positioning accuracy but also improve its suitability for different situations.
At the implementation level, when the anchor has been installed, it is generally necessary to collect the antenna position of the anchor using a total station or laser range finder to define this positioning area and establish the relative coordinate system. However, coordinate acquisition can only be performed by using non-prism alignment to the approximate center of the base station shell, as UWB antennas generally do not have a stable phase center. Inevitably, measurement errors will occur during this process that will have an impact on the positioning accuracy. Therefore, more accurate measurement methods, such as indoor LiDAR, could be applied to the benchmark calibration of the system that would reduce initial system errors and improve the system’s accuracy.

Do you want to get in touch with Hi-Target after reading this article?