The use of UAVs (unmanned aerial vehicles) in ecology and conservation is building momentum, with many research groups around the world exploring this novel way to collect images of animals for analysis. Most of this work is being carried out on land, but a few intrepid scientists are starting to venture out over the water, and my team from the Zoological Society of London are no exception. There is also a growing need for effective vessel surveillance out at sea. This article will showcase our latest expedition to the beautiful Turneffe Atoll in Belize and the UAV that makes all our pioneering science possible; an amphibious Aeromapper Talon built by Canadian company Aeromao. The Turneffe marine protected area (MPA) in Belize was delineated in 2012, but is difficult to manage, in part due to illegal fishing, its remoteness, and high running costs. 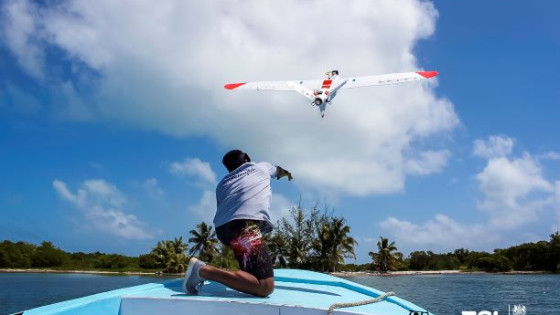 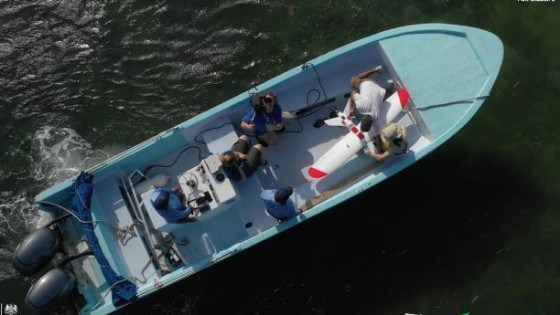 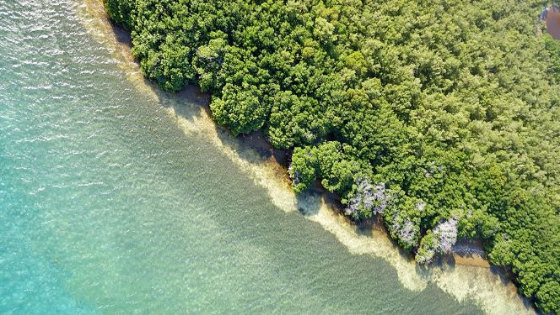 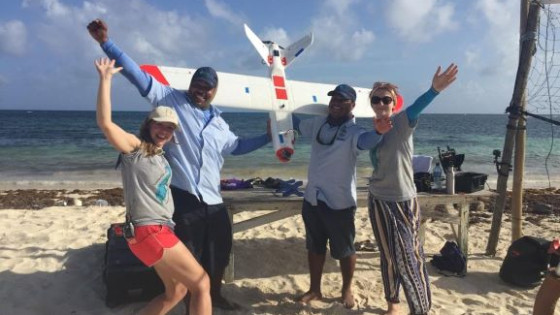 We began working with Aeromao in early 2018, when we commissioned a waterlanding and waterproof fixed-wing, long range, multi camera UAV, which could be used to monitor and survey marine megafauna (such as turtles, dolphins and sharks), but could also be an effective tool in gathering evidence of illegal, unreported and unregulated fishing (IUU). The reason we had to commission this unit, is because, quite simply, nothing else on the market was suitable; quad copters have limited endurance and are not suitable for traversing the sea and small islands for great distances, and some of the delta wings and similar units were unfixable in situ (a seriously important consideration when you’re a remotely based field scientist). Also, nothing on the market had two cameras nor was waterproofed.
In February 2019, we embarked on our second expedition using the Aeromao Amphibious Talon; the first was made in June-July 2018 in the British Indian Ocean Territories. Our team and Julian Villada from Aeromao embarked on a journey which took us to the Caribbean’s barrier reef (the biggest in the western hemisphere). Working with the Turneffe Atoll Sustainability Association’s Conservation officers, we were based on a stunning beach within the headquarters of the organisation.

” The amphibious drone was able to fly to the site of interest at 110m altitude, gather intelligence and fly back very quickly. The images highlighted that indeed illegal building work had been occurring. Without the UAV the conservation officers would have no way of knowing this and they were very excited at this revelation”, states one of the conservation officers.

Fig. 1: Members of the expedition team celebrate after completion of another successful flight exploring an area located 10.5km away from the launch location

Water-landing Drone/UAV was the Solution

The current enforcement strategy involves patrols in small boats, around the atoll, to find illegal fishers. Systematic surveys of megafauna are not regularly carried out, so the conservation officers tend to document animals they come across on their patrols in a specially designed database. However, boat fuel is very costly, and this limits the area the conservation officers can patrol. They were looking for a low-cost, robust technological answer to their management issues and the water-landing UAV was the solution.
The Talon UAV is designed for easy deployment, easy flying Beyond Visual Line of Sight (BVLOS) and easy retrieval. It was decided that the conservation team in Belize would learn to fly the UAV and fly their own patrol transects, to see how effective it could be.

The first flights we conducted were around the HQ bay area and then further out into the ocean and along the mangrove forests. The drone was deployed effortlessly by hand into the wind from the beach and flew gracefully through the air. The UAV can fly for up to one and half hours at a speed of 62kph, meaning that it can cover a huge distance and potential surveillance area quickly.

Fig. 2: Skiffs were used not only for retrieval of the UAV after landing on the ocean, but also as a moving base in order to cover greater areas.

The UAV was also repeatedly tested in BVLOS scenarios. In fact, 24 BVLOS flights were successfully flown during the trials, at an average length of 10.9km and with total transect lengths of 263km. The UAV reached a furthest point BVLOS of 11.3km. Whilst the UAV flies, the 20mp nadir camera takes 5 images per second, or stunning HD film and the front camera, which can be panned left to right, films and records a live stream, allowing the conservation officers to see what’s out there in real time, on the ground station. Mapping of habitats, using the nadir camera was also possible. Some areas of coral reef and seagrass beds were mapped using Agisoft Metashape.

Impressive geo-referenced images of turtles, sharks, eagle rays, manatees and birds were gathered during the surveys. A variety of habitats were captured, and to identify environmental issues, such as accumulation of plastic debris, and of sargassum seaweed which can cause deoxygenation of the water and block out sunlight.

Fig. 3: Launching the drone from the boat and retrieving anywhere from the water proved to be a giant leap in versatility and convenience.

Data was used to build a spatial picture of how the atoll is used, be it by fishers or fauna, and when and where fishers are acting with impunity. The results and conclusions can feed directly into planning where marine protected zones are placed. Previously, information on fish abundances would be collected from by-catch on fishing vessels. Since the Turneffe Atoll is a protected area, you can’t rely on catch data anymore- this is where the drones really come into their own as a non-invasive and efficient tool for surveying.
The conservation officers get from A-to-B in the atoll using small motorboats or skiffs. We decided to test something which had never been done before with Aeromao’s Talon, let alone the amphibious one: we were able to do several static launches of the UAV from a small, moving skiff in the lagoon! This is a tremendously important, and previously unknown ability of the UAV, as it now means that the conservation officers can steam to an area where a beach for launching may not exist (very common in mangrove forests), and simply launch from the boat, then land on the water beside the skiff once the mission has been completed. This way, no part of the atoll is out of reach for the conservation team.

Fig. 4: Land and water were patrolled regularly. More than 35,000 images were collected and analysed during the expedition.

UAV to Become Essential Part of Patrolling and Enforcement Strategy

We are very confident as scientists that having a UAV which can easily land safely on the ocean and be flown again in moments is an exceptionally valuable tool.
Likewise, the conservation officers in the Turneffe Atoll are adamant that a UAV like the one we trialled will become an essential part of their patrolling and enforcement strategy, which will ultimately lead to increased biodiversity in the area. To summarise, the key achievements of the trials were:

1. First deployment of our water-landing fixed-wing UAV in the Caribbean.
2. First ever use of a live-link fixed-wing in the marine reserve.
3. Training the first two Belizean Conservation Officers to use our UAV system.
4. The successful gathering of reconnaissance images.
5. First ever deployment of the UAV from a small, moving skiff.
6. Detection of eagle rays, manatee, birds, cushion star, bone fish and turtles.
7. Twenty-four transects flown, with a total flight length of 263km. 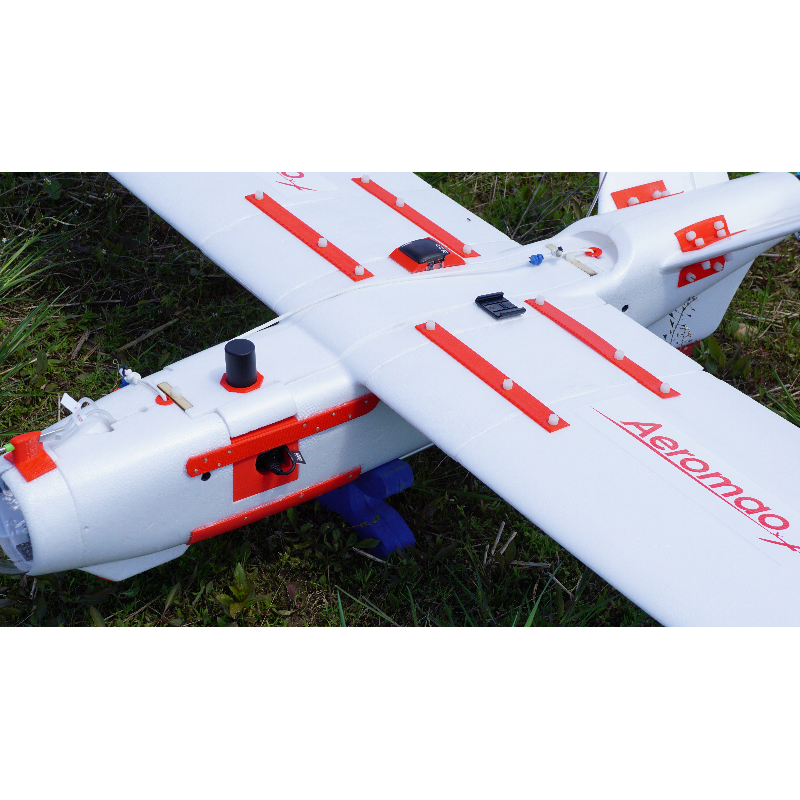 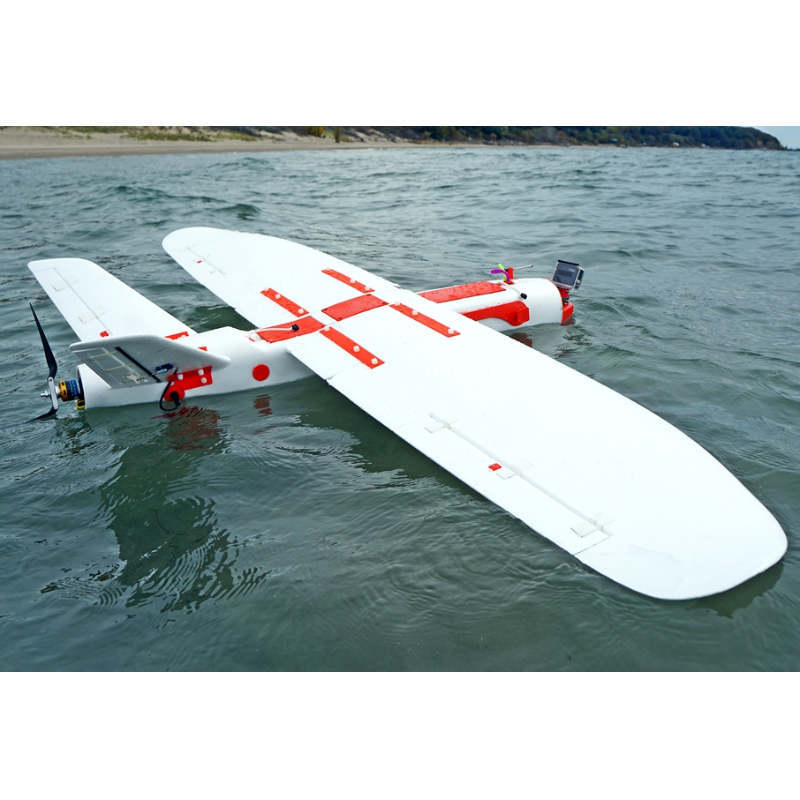