GNSS Technology for Precise Accuracy and Efficiency in Remote Locations

Surveyors working in remote locations often must meet requirements for precise measurement. The work comes with unique challenges. By drawing on Trimble technology, geospatial professionals can quickly achieve centimeter precision with a simple, one-person, one-receiver operation. An Australian surveying firm is showing how the new approach is transforming their work 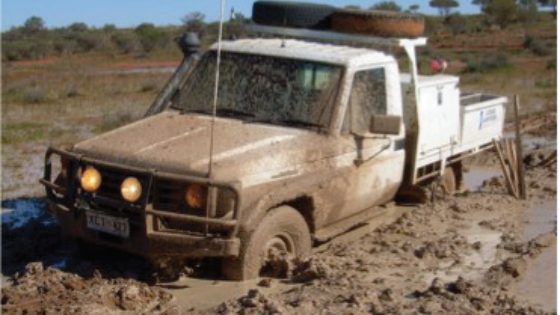 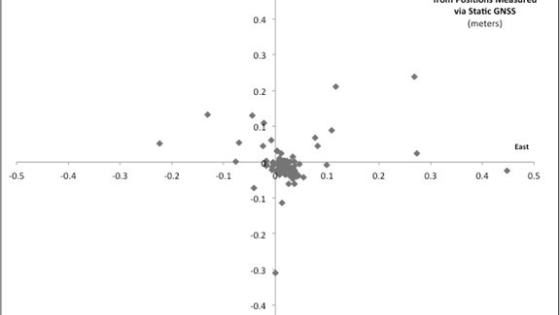 Tucked into Australia’s southern coast, the state of South Australia covers roughly the same area as Germany and France combined. The terrain varies from Mediterranean-style coastal areas to a vast, arid interior. The population is concentrated along the coastline—nearly 80 percent of South Australia residents live in or near the capitol city of Adelaide.

Surveyors using GNSS in South Australia face a dichotomy of conditions. When working near Adelaide, they can access a number of continuously operating GNSS reference stations (CORS) to support RTK surveying. But most other areas lack any real-time coverage. “South Australia is a very large place,” says Joe D’Aloia, survey manager for Fyfe Pty Ltd., an Adelaidebased consultancy specializing in engineering, environmental, planning and surveying services. “There simply isn’t the money or population distribution to support a statewide real-time network.” As a result, surveyors in outlying areas must rely on static techniques to establish local control. They can then use single-base RTK for specific project operations; multiple RTK bases are often needed to produce adequate coverage and accuracy. The static plus RTK method produces good results, but covering large regions adds significant time and cost to any project.

In spite of the difficulties, precise GNSS positions are important. One of their most valuable contributions is to improve the accuracy of the region’s digital cadastral database
(DCDB). The database is used by government and private sectors to overlay boundary information on maps for planning and administration.
In the cadastre’s early years, boundary locations were digitized from old paper maps. Over time, the data has gotten better as surveyors measured and recorded the location of physical monuments.

But there’s still plenty of room for improvement. “If the digital data is more accurate, then aerial imagery and future planning can work from more accurate maps and GIS,” D’Aloia explains. “It helps avoid issues when ground surveys attempt to tie aerial imagery to existing monuments. The difficulty arises in bringing accurate measurements to the remote locations.” 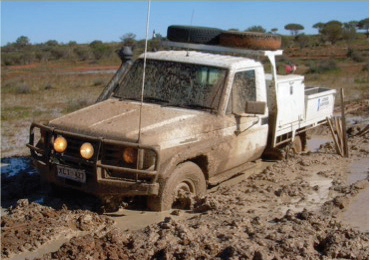 Fyfe was confident that they could solve the challenges of remote surveying for cadastral applications. They developed a plan to use Trimble CenterPoint RTX Correction Services in conjunction with Trimble R10 GNSS receivers.

Based on experience from projects in Queensland and other parts of Australia, Fyfe knew that CenterPoint RTX could provide the accuracy suitable for rural cadastral applications in South Australia. (South Australia’s current regulations call for positional accuracy of 0.15m (0.5 ft) in rural areasl. Point positioning accuracy of 5cm (0.16 ft) is generally accepted in the state’s rural regions.)

D’Aloia wanted to demonstrate the capability to meet accuracy requirements in the state’s outlying areas. He devised a project to make a head-to-head evaluation of  real-time positioning techniques using CenterPoint RTX compared with static GNSS measurement. The work would provide a rigorous test of the performance of CenterPoint RTX under a variety of conditions.

The Fyfe teams identified 40 existing survey marks to use in the tests. While many marks were in open areas, they purposely selected other points under tree canopy or near buildings or obstructions. They occupied each mark with a Trimble R10 and collected two sessions of static observations a few hours apart. They tied to the national reference framework using Trimble R10 receivers on accepted geodetic control monuments. The data was processed in Trimble Business Center software (TBC) and converted into local grid coordinates.

The teams also measured each mark in real time using a Trimble R10 and CenterPoint RTX. They measured each point at least twice, collecting observations with 6 epochs of
data and immediately again with 30 epochs. They collected more than 90 real-time measurements and compiled notes describing obstructions or canopy.

The crews reported that typical time to initialize (or converge) the CenterPoint RTX solution was 10 to 15 minutes; the task was typically required only at the beginning of each survey. D’Aloia noted that the time could be reduced to less than five minutes by using the Quick Start method. “Managing the convergence is part of the learning process,” he said. “Rather than trying to collect a point in a location poorly suited for GNSS, it’s faster and just as accurate to set a pair of points in the clear and use a total station to measure to the mark.”

After downloading the data to TBC, D’Aloia compared horizontal positions of the static and real-time results. The results were excellent. D’Aloia found that more than 30 percent of the real-time measurements agreed to within 2cm of the static observations and 73 percent came within 5cm of the static results. Aside from a few obvious outliers noted by field crews due to heavy canopy, all of the points measured using CenterPoint RTX were within a half-meter of the static positions.

CenterPoint RTX operates in the background and enables users to follow existing workflows for real-time GNSS surveys. In some locations, CenterPoint RTX can produce real-time accuracy of better than 4 cm. 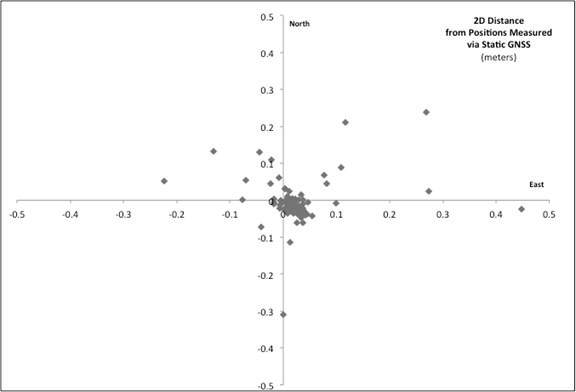 Plot of CenterPoint RTX via static GNSS positions. Accuracy of 5cm or better was common.

A Solution for Difficult Challenges

The performance of the Trimble solution has instilled a strong sense of confidence into the Fyfe surveying teams. With the South Australia test complete, the company can cite multiple examples of the performance and reliability of CenterPoint RTX. The experience helps them determine if CenterPoint RTX is suitable for a particular job. D’Aloia noted that in the isolated areas, the convergence time is an easy trade-off compared to the time and effort needed for RTK.

By eliminating the need to establish control and manage RTK base stations, the CenterPoint RTX solution produces significant time and cost savings. The ability to produce realtime positions quickly with accuracy of a few centimeters gives Fyfe an advantage over competitors using conventional RTK surveying. “It’s horses for courses,” D’Aloia said. “The surveyor needs to assess each situation. If you are looking for 5-cm accuracy in remote locations, then this is a very strong choice.”

“CenterPoint RTX is a good tool in areas where control is sparse and there are no real-time networks.
It produces accuracies that otherwise would be very expensive to achieve.” JOE D’ALOIA, Survey Manager, Fyfe Pty Ltd. 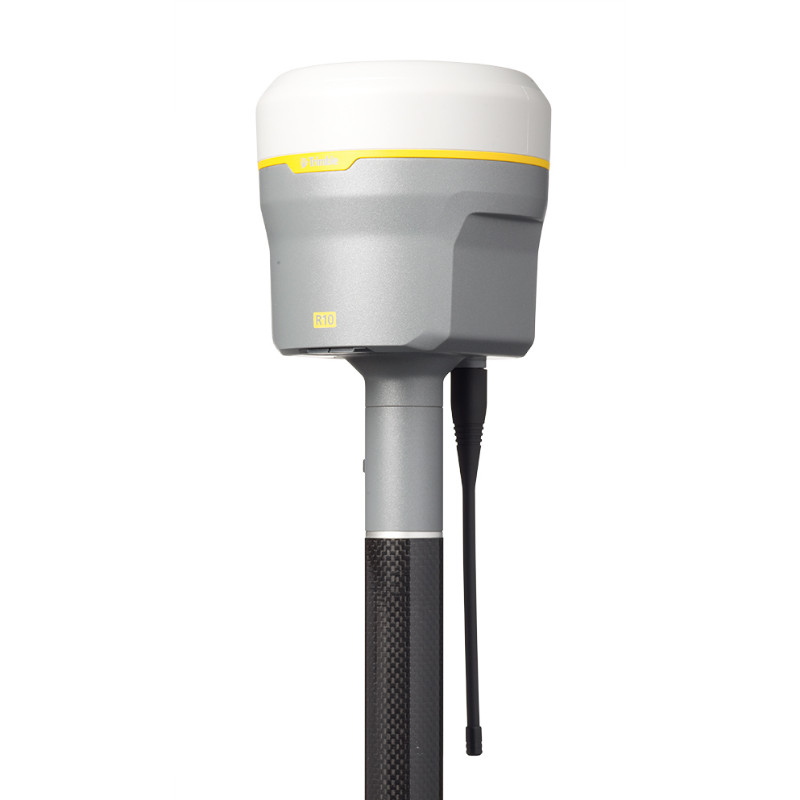 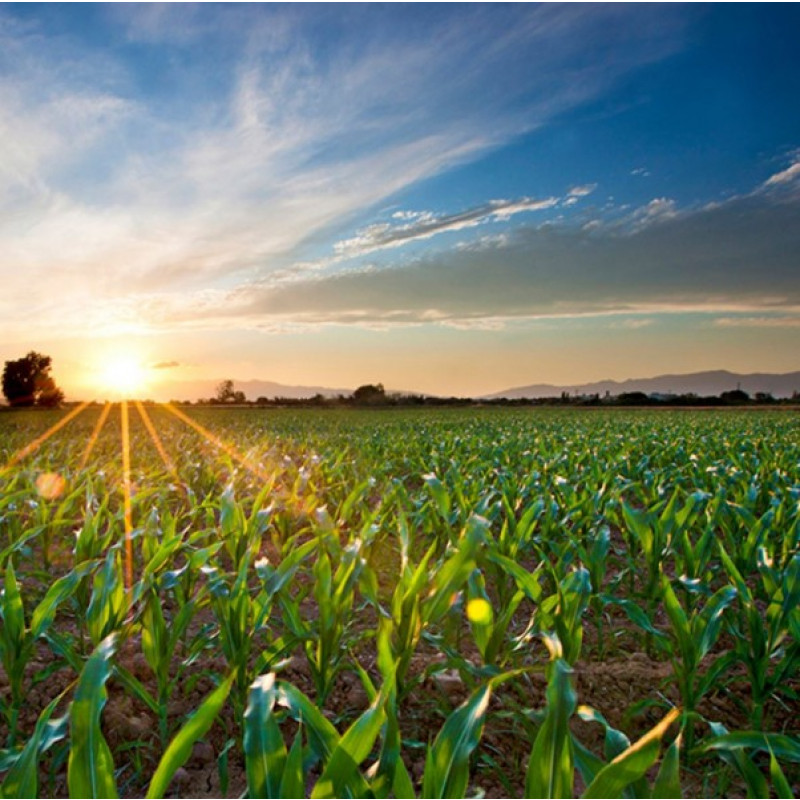