In recent times, underwater robots have grabbed the spotlight as the new workforce for exploring the ocean. Yet a robot's enduring value depends on the toolkit. In the case study below, you can see how Teledyne RDI's ADCPs have been added to the Wave Glider - a vehicle that can cross the Pacific without ever needing to refuel. Carrying ADCPs on these unmanned vehicles provides a flexible and economical means for monitoring upper-ocean currents. This combined tool provides a unique means to see and deliver information about the underwater situation. As well as enhancing scientific studies, this approach can aid marine operations by improving safety and efficiency as well as reducing risk. 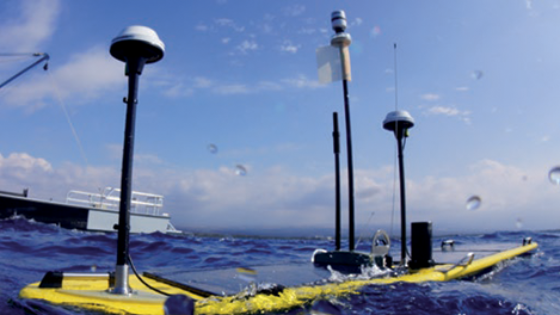 OVERVIEW
Teledyne RDI ADCPs equip ships worldwide for measuring currents in the upper ocean. This capability reveals the 2D distribution of upper-ocean currents — along-track and through depth. Over time, these views of circulation patterns have become expected content in survey reports.

During the last two decades, technology has improved for providing platforms for autonomously exploring the ocean’s spatial variation. Operating unmanned vehicle is much less costly than operating ships. Carrying ADCPs on these unmanned vehicles provides a flexible and economical means for monitoring upper-ocean currents.

For scientific studies, Wave Gliders carrying ADCPs can simplify exploring upper-ocean responses to atmosphere forcing. This tool can also show current circulation patterns in sparsely-observed oceanic regions. Where currents are weaker, Wave Gliders with ADCPs can replace ships in some types of recurring surveys. As well as returning detailed and extensive data sets, this approach will reduce costs and resources for operators. Examples include fisheries management, monitoring the marine environment, and providing indicators for El Nino and climate change.

Wave Gliders with ADCPs are likely to play an enhanced role in operational support for industry. They provide a unique means to see and deliver information about the underwater situation. This approach can improve safety and efficiency as well as reduce risks. It can also provide warnings where industrial activity overlaps with sensitive marine life and environments. 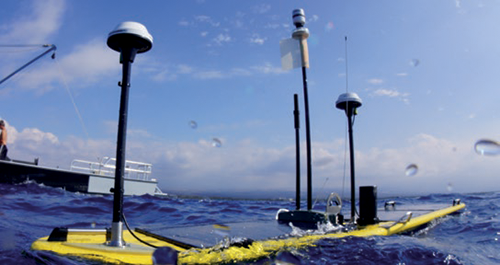 Wave Gliders are propelled by a tethered rack of wings that react to passing waves (Credit: Liquid Robotics)

PLATFORM - WAVE GLIDERS
Wave Gliders by Liquid Robotics are propelled using wave energy. They travel at the surface rather than dive so they are classed with unmanned surface vehicles. Wave Gliders move at slower speeds (0.25 – 1 m/s) yet they can travel great distances without ever needing to refuel. To extract energy from waves, Wave Gliders use an ingenious design consisting of two separated parts. At the sea surface is a surfboard-like float that carries most of the payloads. Tethered 6 m below is a rack of wings that propel the system by reacting to passing waves. The most recent version, Wave Glider SV3, includes a collapsible thruster at the rear of the winged rack. The thruster aids operating in low winds, high currents and in avoiding obstacles; it can be triggered remotely.

The Wave Glider’s surface location permits continuous telemetry to shore and GPS navigation. Not only can sensor data been seen in near real-time but the mission can be adapted. Examples include changing the Wave Glider’s course and reconfiguring the setup of onboard sensors. Solar panels power the onboard electrical systems, such as navigation, instrumentation, and communications.

Wave Glider applications vary from maritime surveillance, mapping surveys, and oil-spill cleanup to fisheries management and environmental monitoring. For other jobs, Wave Gliders hold station, such as when aiding seismic surveys or relaying data sent from seabed-mounted devices. At times, several Wave Gliders have been deployed concurrently to observe the ocean in both space and time.

Wave Gliders have carried a wide variety of sensors. These range from hydrophones for listening to whales to weather sensors and wave gauges for measuring storms. Other sensors measure water properties for chemistry and biology. ADCPs aboard Wave Gliders report 2D spatial transects of water currents — along track and through depth.

SOLUTION - ADCPs On Wave Gliders
Teledyne RDI’s ADCPs are synonymous worldwide with measuring currents in the upper ocean. The ADCP’s onboard signal processing produces results that can be sent immediately to aid decision making in operational situations. This leads to improved safety, efficiency, and reduced risk. Sending processed results also saves time and money for users analyzing the data or even for those posting it to the Web.

When using ADCPs on Wave Gliders, operators can take advantage of the telecommunications link. They can reconfigure the ADCP or even repurpose its activity during a mission. Examples include turning on or off bottom tracking, reconfiguring the current profile, or changing the averaging period for the processed data. This in-situ flexibility is not always available for ADCPs mounted below surface buoys.

Adding the ADCP’s capabilities to a Wave Glider pointed to a flexible and powerful tool for monitoring upper-ocean currents. Yet it was essential to confirm the accuracy of ADCP current profiles measured on a platform that rides surface waves.

Two dedicated studies addressed the accuracy of ADCP profiles measured from Wave Gliders. They confirmed the reliability of the current measurements. The first was a shorter study off La Jolla California, performed with Teledyne RDI. A more extensive study was conducted at Liquid Robotics’ test site in Hawaii. Both studies used a reference ADCP mounted on the seabed. Its current profiles were compared visually and statistically to ADCP data from Wave Gliders. The researchers observed glitches at the depth of the Wave Glider’s wings due to acoustic interference. Otherwise, they reported profiles from different ADCPs to be “remarkably similar both in magnitude and in temporal variability.”

Four Wave Gliders carrying ADCPs provided environmental data. The Wave Glider fleet included three Boeing SHARC vehicles and one from the UK NOC. Data was sent in real-time to the operations room where it was visible via the mission website. 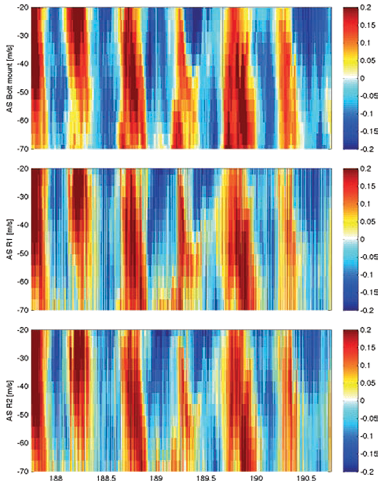 The Wave Gliders traveled 100 miles across the Hebridean Shelf, north of the Outer Hebrides. As well as recording water properties and weather conditions, the gliders measured currents and depth.

During part of their deployment, the Wave Gliders collected data in high seas with wave heights exceeding 6.5 m. During this time of sea state 7, the Wave Gliders were in a holding pattern. They observed strong tidal currents. The data showed the tide turned first at the seabed but quickly had a consistent direction throughout the 70-m water depth.

North Sea Studies
Off Belgium, a team from the Royal Belgian Institute of Natural Sciences monitored sediment transport and dredge plumes around sandbanks.

An ADCP on the Wave Glider played two roles. First, it measured current strength and direction. Second, it revealed turbidity through the water column. An optical sensor measured turbidity in the surface waters. ADCP results showed that these surface values did not reliably indicate subsurface advection and resuspension of sediments.

The Wave Glider’s ADCP detected a plume traveling in the middle part of the water column. The researchers judged traditional monitoring would likely have missed this type of plume. They noted that the location of the plume’s dispersion and settling is difficult to predict. Water currents and weather conditions exert strong influence on the plume’s path.