Since 2014, the Ocean Observatories Initiative (OOI), in partnership with the University of Washington, has been using SubC Imaging’s subsea cameras, LEDs and lasers on the Regional Cabled Array (RCA). 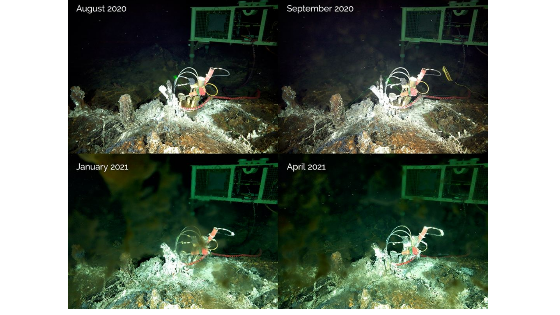 Since 2014, the Ocean Observatories Initiative (OOI), in partnership with the University of Washington, has been using SubC Imaging’s subsea cameras, LEDs and lasers on the Regional Cabled Array (RCA).

Axial Seamount, a key experimental site on the RCA, is the most active submarine volcano in the Northeast Pacific. It is located 250 miles off the Oregon coast and sits at a depth of 1500 m and last erupted in April of 2015. Seismic data tells us that there are two large magma reservoirs beneath the volcano providing heat that drives underwater hot springs and the creation of hydrothermal vent deposits, making this a key seafloor observation site for researchers. It is the most advanced volcanic observatory in the oceans.

Scientists have been using SubC Imaging Rayfin cameras across many RCA observatory sites since August 2020, including the International District Vent Field 1 on Axial Seamount. The camera system includes an Aquorea LED lamp, Mantaray Parallel lasers, and a pan-tilt unit.

Research at the International District Vent Field is investigating the chemistry and temperatures of high temperature and diffuse flow vent sites, and the novel microbial communities that they host. A goal is to understand the connections between seismicity, fluid temperatures and chemistry, and the evolution of biological communities over time in highly dynamic environments exposed to volcanic eruptions.

In the time-lapse image example, you’re seeing 20 high-resolution digital stills of Tiny Towers per month over 10 months -- from August 2020 to May 2021. It’s interesting to see how the environment changes and the marine growth starts to form on the camera lens.

Have questions about SubC Imaging and our observatory camera systems?

Do you want to get in touch with SubC Imaging after reading this article?

The Rayfin records and internally stores over 10 hours of 4K video, 40+ hours of HD video and thousands of digital stills.

A high-efficiency, TTL synchronized subsea LED module that operates as both a lamp and a strobe.